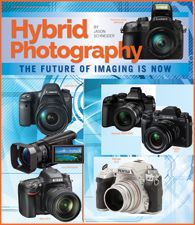 If you Google “hybrid cameras,” it’ll bring up a raft of articles on mirrorless compact system cameras, which are indeed hybrids since they provide DSLR functionality in smaller form factors. However, the true hybrids of the camera world, and those destined to most dramatically shape its future, are cameras that provide the best of two worlds—high-quality still imaging with impressive AF speed and accuracy, fast burst rates and outstanding high-ISO performance as well as studio-quality Full HD 1080p or 4K video recording at multiple framing rates and excellent sound quality.

Serious enthusiasts and professional video shooters are now using DSLRs or mirrorless system cameras to create video productions of superlative quality, and photographers specializing in sports, events, weddings and on-the-spot interviews are expected to shoot videos and stills in the course of an assignment. Whether to shoot stills or videos is no longer even a valid question—pros of all stripes have to execute both at the highest level to remain competitive. Many of today’s greatest sports shots are high-res stills taken from video clips.

Anyone who needs to be convinced of the breadth of this accelerating trend should take a look at the proliferation of “run and gun” video rigs for DSLRs and the range of mikes and other audio accessories that have come onto the market.

Another key trend spurred by the convergence of still and video is Wi-Fi connectivity, which enables everyone from casual shooters to pros to share their images and videos on social media, or to make them available in real time to editors, production people and clients.

The coming “4K revolution” in video capture, the amazing advances in image processors and sensors, and forthcoming innovations in on-sensor phase-detection AF will undoubtedly take still and video imaging to unprecedented new levels. But for now it is clear that hybrid photography in the dual-media sense is the new modality destined to shape the future of imaging.

The evolution of hybrid photography is just beginning. And, it’s significant that of the eight hybrids detailed here, three are classic DSLRs, four are DSLR-like mirrorless interchangeable-lens cameras and one is a 4K video camcorder capable of capturing high-quality stills.

Other features include: built-in Wi-Fi with NFC technology pairs with the Panasonic Image app for remote shooting with smartphones/tablets and to embed location data; non-NFC devices can be connected by scanning a QR code displayed on the GH4’s monitor; custom multi AF enhances flexibility when composing shots; and an optional 4K video interface unit has two XLR input terminals. $1,699.99 body only. panasonic.com

Olympus OM-D E-M1
The flagship of the Olympus MFT lineup, the mirrorless E-M1 delivers the DSLR experience in an exceptionally compact, light camera that offers an array of cutting-edge performance and convenience features. These include a 16MP Live MOS sensor; a fully integrated, interactive EVF that displays a 2,360k-dot image at 1.48x; and instant auto switching between the EVF and the 3.0-inch, 1,037k-dot tilting touch-screen OLED monitor.

The E-M1’s ingenious camera control array is optimized for fast, intuitive operation and includes eight customizable control buttons and a two-dial-plus-function-lever system that simplifies adjustments on the fly. Other features include wireless connectivity to a smartphone and a rugged, dustproof, freezeproof, weatherproof magnesium alloy body. $1,399.99 body only. olympusamerica.com

Pentax K-3
The latest top-of-the-line Pentax is a classic DSLR that takes the acclaimed K line to a higher level with an upgraded 24MP APS-C-format CMOS sensor and an ingenious user-selectable floating image sensor mechanism that emulates the effect of an optical anti-aliasing filter to give users the choice to leave it off for superior resolution and detail capture, or turn it on to eliminate moiré. Other features include multi-pattern auto white balance; dual SD card slots; a larger 3.2-inch, 1,037k-dot LCD; and a 0.95x viewfinder.

Nikon D610
This impressive full-frame DSLR is favored by enthusiasts and pros because it delivers high imaging performance in still and video capture, and outstanding low-noise image quality at elevated ISO settings, up to 25,600, with an extended dynamic range. It boasts a 24.3MP FX-format CMOS sensor, an Expeed 3 image processor, a 3.2-inch, 921k-dot LCD monitor that provides detailed image evaluation, and a built-in flash commander mode.

The Nikon D610 supports the optional WU-1b wireless mobile adapter for Wi-Fi connectivity and remote control as well as a GPS unit for geotagging applications. $1,899.95 body only. nikonusa.com

The EOS 6D has a built-in Wi-Fi transmitter for transferring images and videos to social networking sites using Canon Image Gateway via Android or iOS devices, or for using a smartphone for remote camera operation via the EOS Remote app. It also has a built-in GPS receiver to geotag images, and HDR and multiple exposure modes to expand creativity. $1,899 body only. usa.canon.com