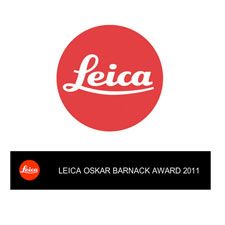 Allendale, NJ—Leica Camera AG is inviting professional photographers to submit entries to the Leica Oskar Barnack Award, an international photography competition. Photographers wishing to take part may submit their projects online between January 16 and March 1, 2012. The terms and conditions of entry can be downloaded from leica-oskar-barnack-award.com shortly before the start of the competition.

The winner of the 2012 Leica Oskar Barnack Award will receive a Leica M9-P camera with lens worth approximately $14,000, in addition to a cash prize. A second honor will be awarded in the category Leica Oskar Barnack Newcomer Award, for aspiring professional photographers aged 25 and under. The winner of the first prize in this section will also be awarded a Leica M9-P complete with lens.

An international jury awards the Leica Oskar Barnack Award/Leica Oskar Barnack Newcomer Award to photographers “whose unerring powers of observation capture and express the relationship between man and their environment in graphic form in a portfolio of up to 12 images. Submissions must be a self-contained series of images in which the photographer perceives and documents the interaction between man and his environment with acute vision and contemporary visual style—creative, unobtrusive and groundbreaking.”

With this competition, Leica Camera AG remembers Oskar Barnack (1879–1936), the inventor of the Leica. From 1914 on he increasingly used the prototype camera he developed, the so-called Ur-Leica, for photography. The history of photojournalism is closely tied to his invention, as, beginning in 1925, the compact Leica cameras were instrumental in enabling new and expressive forms of photography. us.leica-camera.com