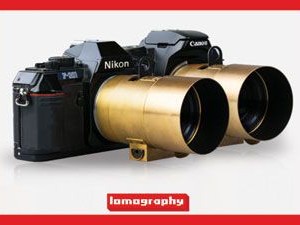 New York, NY—Lomography’s latest Kickstarter project is the reinvention of the Petzval lens that made an impact in 19th century photography with its distinct look—sharp centers and a unique bokeh effect. Lomography’s improved version, called the Lomography Petzval (D)SLR Art lens, is designed to work with Canon and Nikon DSLR cameras.

Lomography is reengineering the Petzval lens for 21st century photographers and videographers, whether they shoot analog or digital. The new Lomography Petzval portrait lens is designed to work with Canon EF and Nikon F mount cameras, so users can get the Petzval photographic look with 35mm analog cameras and DSLR cameras, too—even when shooting video.

The Petzval lens was invented by Joseph Petzval in Vienna in 1840. Photos shot with the lens are recognizable for their sharpness and crispness, strong color saturation, swirly bokeh effect, artful vignettes and narrow depth of field. The speed and performance of Petzval’s design was especially well suited for portrait shooting and helped give birth to commercial photography.

The new brass Petzval lens is designed and constructed by a team of optics specialists at the Zenit factory in Russia, together with Lomography. The teams at Zenit and Lomography have worked together to redraw, recalculate and remeasure the original 1840 Petzval lens to make it work with a host of modern cameras, while retaining the characteristic effects that made the original Petzval famous.

According to Lomography, the new Petzval lens has “great color saturation and high contrast. The resolution of the focused area of each photo is extremely high.” the Lomography lens has a large f/2.2 maximum aperture to enable a very narrow depth of field, and when shooting with the aperture wide open, users can achieve a vignetting effect.

The Petzval lens design gives photos a different optical effect, with an area that is very sharp at the focus of the photograph over a narrow field. There is then progressive vignetting towards the non-focused areas. And, because of the early large aperture optic design of Petzval, photos taken with the lens have a swirly bokeh effect in the background.

The lens specs include: an 85mm focal length; a maximum aperture of f/2.2; a Waterhouse aperture set, up to f/16; a 44mm image circle; a 30º field of view; a close focus distance of 1m; and a 67mm filter thread. It is constructed of four elements in three groups.

For those who want to support Lomography’s Petzval project, the company is offering a selection of rewards exclusively for its Kickstarter pledgers. To browse the selections, log on to http://www.kickstarter.com/projects/lomography/the-lomography-petzval-portrait-lens.

The expected delivery date of the lenses is February 2014, but Lomography is hoping to have the first 1,000 lenses shipped by December 2013. The retail launch price of the lens is $499 and the Special Edition will be $599. lomography.com