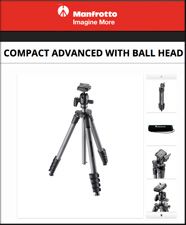 The Compact Advanced with Ball Head (MKCOMPACTADVBH) is targeted at advanced photo enthusiasts who own an entry-level DSLR with standard zoom lenses up to 200mm or a high-end mirrorless camera. It features a ball head made of solid aluminum with a friction control. The ball head is engineered to enable micro-movements without opening and closing the head lock, allowing for more accuracy in framing subjects and easy setup. With a 200LT-PL quick-release plate, the ball head attaches under a camera by rotating a special flip. For portability, when not in use the ball head can be folded to make the tripod more convenient to carry.

The new tripod includes reinforced five-section tubes, enabling it to reach a maximum height of 65.8 inches when fully extended. At 3.1 pounds, the tripod and ball head can handle a maximum load of 6.6 pounds.

Also included in the kit are a padded carrying bag and a Sony NEX 5R/5T camera adapter that increases the surface of those cameras to better grip to the tripod.

Manfrotto’s MKCOMPACTADVBH, which replaces the existing 390 series with ball head, is available in black for $99.99. manfrotto.us