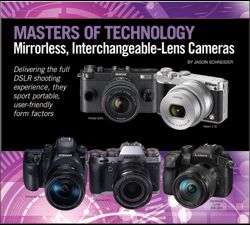 The latest mirrorless, interchangeable-lens cameras provide the complete DSLR shooting experience and more. Their smaller, lighter form factors appeal to a wider variety of consumers, including casual shooters, travelers and women. Indeed, some industry experts have predicted that mirrorless cameras will eventually supplant DSLRs, which are inherently larger, heavier and more complex, for all but high-end professional users.

The technological reasons behind this emerging trend have been significant advances in two key components: the electronic viewfinder (EVF) and the autofocus (AF) system. And while current EVFs may still not equal the “real feel” view provided by the best optical DSLR viewfinders, they have come so far that the differences may no longer be significant to most users.

Today’s best mirrorless models incorporate high-resolution EVFs with incredibly rapid refresh rates that provide a brilliant high-magnification viewing image that rivals that of most optical viewfinders (OVFs). They also have the advantage of allowing users to preview the captured image (complete with exposure corrections and custom settings) in real time. And because of their elevated refresh rates, they provide continuous viewing without “smearing” when viewing fast-moving subjects—the bane of older generation EVFs.

Hybrid AF systems that combine the advantages of fast, decisive on-sensor phase-detection AF and the precision of contrast-detection AF have also taken the autofocus performance of mirrorless cameras to a level surpassing that of most DSLRs. And the advantages of hybrid CAF/PDAF systems also include the ability to provide continuous AF and focus tracking before and during the exposure. This is a crucial factor when shooting still images at high burst rates, or when capturing clean HD video without visible or audible “hunting.”

At their best, mirrorless models combine the advantages of both DSLR and point-and-shoot cameras, providing lens interchangeability, ultrahigh image quality and the entire high-end feature array of middle- and upper-tier DSLRs in smaller, lighter, handier form factors. They have fewer moving parts, and shutter-release noise and vibration are minimal thanks to the elimination of the moving mirror.

Furthermore, they have a shorter flange back distance that’s especially beneficial when designing high-performance wide-angle lenses. And the shorter lens-to-sensor distance allows users to mount their existing DSLR lenses and a variety of third-party optics, including legacy rangefinder lenses. Not surprisingly, as the popularity of the mirrorless models has dramatically increased over the past two years, camera makers and independent lens manufacturers have expanded their lens offerings. This has increased the creative optical options available to consumers as well as marketing opportunities for dealers.

In fact, entry-level and mid-tier mirrorless models have also benefited from the category’s technological advances. The result is an array of enticing models offering features that have migrated down from higher end models, often with simplified user interfaces—and at competitive prices. It’s like the Great DSLR Evolution all over again, but without the flipping mirror and with the potential of attracting a wider user base.

Pentax Q-S1. The elegant contours and leather texture of this aluminum-bodied ultracompact recall the classic rangefinder cameras of the past—but inside the Q-S1 is thoroughly modern. Its 12.4MP, 1/1.7-inch, backlit Pentax-Q-format CMOS sensor (with a 4.6x crop factor) is married to a Q engine image processor. Together they deliver a maximum full-res burst of 5 frames per sec, continuous RAW shooting, Full HD 1080p video recording at 30/24 fps, and a 12,800 maximum ISO setting. Its 3-inch, 460K-dot LCD monitor offers a 170º viewing angle and AR coating. Plus the camera offers built-in shake reduction and a wide array of in-camera effects, including bokeh control, all of which can be previewed in real time.

Sony Alpha a7 II. One of Sony’s a7 high-performance, full-frame, mirrorless models, it is the first to feature sensor-shifting 5-axis SteadyShot Inside image stabilization (IS). The IS system provides a claimed 4.5 stops of compensation for pitch, yaw, horizontal and vertical shift, and roll. This is a big plus when shooting Full HD 1080p video at 60p, 30p and 24p using the high-bit-rate XAVC S format, or shooting handheld stills in low light. The a7II employs a 24.3MP Exmor CMOS sensor paired to a Bionz X processor. Its enhanced “Fast Hybrid” AF system uses 117 phase-detection and 25 contrast-detection sensors on the image sensor, said to provide superior focus tracking and a full-res, 5-fps burst rate with continuous AF and AE.

Nikon 1 J5. This recently unveiled Nikon 1 mirrorless camera based on the 31.2×8.8mm CX format is aimed at attracting serious shooters. While somewhat more compact than previous Nikon 1 cameras, it’s solid and elegant, with crisp contemporary styling. Its BSI CMOS sensor has been increased to 20.8MP, and perhaps more important, it has an upgraded Expeed 5A image processor. The latter helps to deliver such notable advantages as improved overall speed and responsiveness, better high ISO performance and ISO settings up to 12,800.

Leica T. This attractively minimalist camera is beautifully made and gorgeously finished (in traditional black or striking white) as you would expect. It lacks the usual array of buttons and dials, being controlled entirely via the big 3.7-inch, 1.3M-dot TFT LCD touch screen. It employs a 16.3MP APS-C CMOS sensor and an advanced contrast-based AF system. The T can capture Full HD 1080p video at 30 fps and shoot continuous, full-res images at up to 5 fps. Its robust body is built on a solid unibody design, precision machined from a solid billet of aluminum (!).

It also has a powerful built-in flash, 16GB of internal memory and Wi-Fi connectivity for easy sharing and remote operation using the free Leica T app for iOS. A bonus is a bundled copy of Adobe Photoshop Lightroom. Among the chief attractions of this camera are the legendary Leica lenses specifically designed for it. Currently there are four, including: the Leica APO-Vario-Elmar-T 55–135mm f/3.5–4.5 Asph; Super-Vario-Elmar-T 11–23mm f/3.5–4.5 Asph; Summicron-T 23mm f/2 Asph; and Vario-Elmar-T 18–56mm f/3.5–5.6 Asph. Body only, $1,849. us.leica-camera.com

Panasonic Lumix DMC-GH4. This brilliant, upgraded top-of-the-line Micro Four Thirds camera provides the full DSLR shooting experience and form factor along with 4K 4,096×2,160 video capture at 24 fps, UHD 4K 3,840×2,160 capture at 30/24 fps, and Full HD at up to 60 fps. Its 16.05MP Live MOS sensor is coupled to a cutting-edge 4-CPU Venus engine image processor, which enables the GH4 to achieve a full-res burst rate up to an impressive 40 fps.

Samsung NX1. Samsung’s sleek, top-of-the-line NX-mount model offers a combination of understated DSLR styling plus an impressive enthusiast-aimed feature set that should delight pros and serious shooters seeking high performance and value. It provides a high-res, 28.2MP APS-C-format CMOS sensor that works with an advanced DRIMe V image processor. It also boasts a 3-inch, 1036K-dot, tilting AMOLED touch-screen monitor, as well as an ultra-high-res 2,360K-dot XGA OLED electronic viewfinder. Most notable is the NX1’s ability to capture 4K 4,096×2,160 video at 24p, UHD 3,840×2,160 at 30p, Full HD and HD video. It has a maximum full-res burst rate of 15 fps complete with AF and ISO settings from 100–51,200.

The NX1 also features filter effects, smart settings and a hybrid AF system that combines phase-detection and contrast-detection AF using 205 phase-detection and 153 cross-type AF points. Add to that dual-channel Wi-Fi with NFC, fast USB 3.0 connectivity and Bluetooth, to sync with smartphones and other devices. With 16–50mm zoom lens, $1,499.99. samsung.com

Other key features include: built-in Wi-Fi connectivity for easy sharing and remote operation via coupled devices; ISO 100–51,200 settings; electronic and mechanical shutter with speeds to 1/4,000 sec; and a weather-resistant body. The camera comes with a shoe-mount Fujifilm EF-X8 flash unit. $1,299.

The Graphite Silver version of the X-T1 has an elegant silver finish and an electronic shutter providing a faster speed of 1/32,000. It can be set in 1/3-EV increments when using the latest Fujinon XF23mm f/1.4 R or XF56mm f/1.2 lenses. Body only, $1,499. fujifilmusa.com