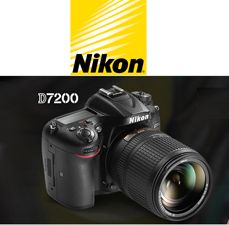 The lightweight D7200 adds increased buffer capacity compared to the D7100 and includes new picture controls. It also offers the experience of Nikon Snapbridge, whereby users can shoot and share photos from the camera to a compatible smartphone or tablet via built-in Wi-Fi and Near Field Communication (NFC) connectivity.

“Those passionate about photography are constantly looking for the next challenge, and Nikon is committed to providing the tools necessary to take that passion to the next level,” said Masahiro Horie, director, Marketing and Planning, Nikon Inc. “The new DX-format Nikon D7200 offers the next level of performance for the enthusiast photographer that wants to creatively capture exceptional images and HD video that can be easily shared with friends and family.”

To maximize the resolution of the camera’s 24.2MP DX-format CMOS sensor, the OLPF was eliminated. The result is a wide dynamic range with the added benefit of “precise autofocus and metering.” When available light is scarce, the camera provides an ISO range from 100–25,600 to help minimize noise. And courtesy of the Expeed 4, the D7200 features 30% faster image processing than its predecessor, the D7100, and an increased buffer capacity that now allows it to shoot 18 consecutive RAW 14-bit lossless compressed images, 27 12-bit compressed shots or 100 JPEG frames.

Additionally, the D7200 can shoot at 6 frames per second (fps) continuously or up to 7 fps in 1.3x crop mode—a popular shooting mode of sports and wildlife photographers. And when shooting fleeting moments or fast action, photographers will appreciate the 51-point autofocus array. The AF points cover a wide DX-format area and nearly the entire frame using 1.3x crop mode. The D7200 also features a 2,016 RGB metering sensor along with Nikon’s Scene Recognition system to help achieve optimal exposure and focus in a variety of shooting scenarios.

The D7200 is the first Nikon DSLR to feature both built-in Wi-Fi and NFC that allow for connectivity and sharing via compatible smart devices. Using NFC, users can touch their device to the camera for easy connectivity, while built-in Wi-Fi allows them to utilize their smartphone for playback and sharing, as well as a remote shutter and monitor.

The camera also sports a feature set designed to foster creativity in any level of photographer. Its next-generation picture controls now include flat and clarity settings, as well as being expanded for use in live view. Plus, artistic effects can be applied to both stills and video in real time.

The camera inherits many of the high-end video capabilities of Nikon’s latest full-frame DSLRs, the Nikon D810 and Nikon D750. Videographers can record uncompressed and compressed Full HD 1080 footage at 30/25/24p and 1080 at 60/50p in 1.3x crop mode. Additionally, auto ISO sensitivity is now available in manual mode, helping create smoother exposure transitions without changing shutter speed or aperture, while a “zebra stripes” highlight display is available to confirm exposure. Video controls are available through a dedicated movie menu, and there’s a built-in stereo microphone with 20 step adjustments. The D7200 is also the first Nikon DX-format DSLR to feature a time-lapse mode with exposure smoothing.

New DSLR Accessories
Nikon also introduced the ME-W1 wireless lavalier microphone. Weather resistant and powered by two AAA batteries, the mic permits users to wirelessly record audio in mono or stereo (when connected to the ME-1 stereo microphone) from up to 164 feet away. $249.95.

For photographers who want to take control of their images after capture, Nikon announced new View NX-i browsing software that allows for more intuitive control of images than before. View NX-i enables users to browse RAW files adjusted by Capture NX-D software and provides easy upload of images to social networks. View NX-i software will be available on March 17, 2015 as a free download. nikonusa.com