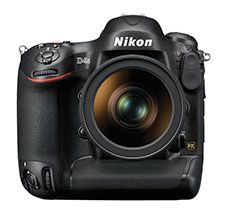 Melville, NY—Nikon officially released its D4S DSLR. A newly developed 16.2 megapixel FX-format sensor works with an Expeed 4 image processor to improve upon the D4 and give users enhanced image and video quality, improved autofocus (AF), faster performance during and after capture, and a native ISO range from 100–25,600 that’s expandable from ISO 50 (Lo-1) to ISO 409,600 (Hi-4) for photos and video. The D4S features a processing time 30% faster, in addition to a 200-shot buffer (JPEG) at full resolution at the maximum continuous mode.

“By announcing the development of the new Nikon D4S earlier this year, Nikon has been able to work openly with professional photographers in the field to hone the camera’s core capabilities into an unparalleled tool that makes otherwise impossible images a reality,” said Masahiro Horie, director, Marketing and Planning, Nikon Inc. “The challenges of today’s professional multimedia photographer go beyond simply capturing amazing content. After the shutter clicks, the workflow enhancements that the D4S provides will give Nikon users an obvious edge in the stands, the studio, on the sidelines or in the field.”

The D4S’s group AF function and overall improvements build upon Nikon’s 51-point AF system. Overall speed and response were enhanced, allowing the D4S to capture full resolution photos at 11 frames per second (fps) with autofocus and autoexposure. And its Multi-Cam 3500 FX AF sensor module’s recalibrated AF algorithms are said to quickly zero in on its intended target— “no matter how near, far or abruptly a subject appears in the frame.”

Additionally, the D4S adds a group AF mode that utilizes five AF points to provide increased stability while tracking subjects, and enhanced accuracy by reducing instances of background focus. Nikon’s AF Lock-On technology was also upgraded, shortening the time when reverting from focus interruptions, such as a referee running into the frame.

Retaining notable features of its predecessor, the D4S aligns 15 cross-type sensors in the center to detect contrast data in vertical and horizontal planes. In addition to detecting each AF-Nikkor lens with an aperture of f/5.6 or lower, it also utilizes nine cross-type sensors that are fully functional when using compatible Nikkor lenses and a teleconverter with a combined aperture value up to f/8.

Its multimedia specs include Full HD video recording in variable frame rates and resolutions, including a new 1080/60p option for increased flexibility in post. Users can also shoot at 1080/30p or a cinematic 24p, as well as other NTSC and PAL frame rates and resolutions. And they can record H.264/MPEG-4 AVC video for 29:59 minutes per clip. Plus, there is now the ability to select an image area in live view mode to match the glass or shooting style; FX, DX (1.5x) and 2.7x cropping are available. The D4S also offers direct output of uncompressed files via HDMI, manual control when shooting video, simultaneously writing to a CF and XQD card, and selectable audio frequencies, with options such as wide range and voice range, and wind noise reduction and audio levels can be changed during recording.