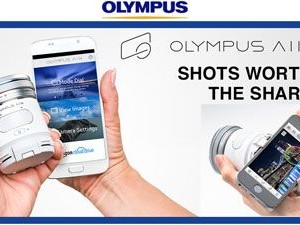 Center Valley, PA—Olympus America introduced the Olympus Air A01 lens-style camera that incorporates Amazon Cloud Drive and excludes an integrated display. Instead, images are composed using a smartphone or tablet, which communicates with the camera via Wi-Fi and the OA.Central for Olympus Air dedicated app.

The included Olympus Air A01 coupling accessory enables users to securely attach the camera to a smartphone. The angled mount allows them to see a live view through the lens from various positions. As the camera and smartphone/tablet communicate wirelessly, the Air A01 can be operated while detached from a smart device, making it possible to capture selfies and other shots that are difficult to obtain using conventional cameras. The Air A01 can also be attached to a tripod.

Expanding the capabilities of a smartphone, the Air A01 relies on the imaging technology of Olympus’s mirrorless cameras and family of M.Zuiko digital lenses. The compact camera features the same 16 megapixel Micro Four Thirds sensor and TruePic VII image processor as the latest OM-D and PEN cameras, to deliver DSLR image quality and low-light performance.

It also has an MFT mount and is compatibility with Olympus’s collection of Micro Four Thirds lenses. Users can choose from a variety of lens options to meet their individual shooting needs: from wide-angle landscape lenses for discreet street shooting to high-powered zoom lenses.

Additionally, the Olympus FAST AF system aids in delivering high-speed, high-precision focusing whenever a user taps the focus location on a connected smartphone. The camera also features RAW capture, Full HD 1080p video recording, 10-frames-per-second consecutive shooting (with focus and exposure fixed), and a silent electronic shutter with a 1/16,000-second maximum speed. The included battery can be charged using any USB power source and is rated for 320 shots per charge. In all, Olympus designed the camera to transform “smartphones with previously limited imaging capabilities into cameras that enthusiasts and semi-professionals alike can enjoy!”

The newly developed app, OA.Central for Olympus Air, is available in the Apple App Store, Google Play and Amazon Appstore. Via the camera/smartphone/app combination, users will be able to instantly transfer DSLR-quality photos to e-mail and social networks as well as automatically upload them to the Amazon Cloud Drive for secure storage. With this direct-to-cloud storage, they can minimize the strain on the memory of their smart devices and have instant access to their images for upload across social media. Local storage is also available using a microSD memory card.

When users launch the OA.Central for Olympus Air app for the first time, connection preparations, Bluetooth settings and Wi-Fi settings are explained with illustrations. After setting up Air A01 using the app, six shooting functions are available:

•    Art Filter. Users can select one of 14 art filters and touch the screen to capture an artistic image. Art filters can be combined with art effects.

•    Color Creator. Via an intuitive color ring, photographers can adjust color hues (30 levels) and saturation (8 levels) to enhance a scene.

•    Photo Story. To capture a single scene of everyday life from multiple viewpoints, users can follow on-screen instructions to select from four frame patterns. Then, depending upon the selection, they can choose the number of frames or add an art filter.

•    Clips. This allows photographers to shoot, combine and rearrange multiple short clips into a single short movie of up to 64 seconds. They can choose from 14 art filters, touch the smartphone screen to focus using touch AF, operate the zoom (when using an electronic zoom lens) and use up to 3x digital zoom. They can also add transition effects, art effects and music (default only), all in-camera.

•    Genius. Using this function, with a single release of the shutter subjects are automatically detected and six creative versions of a single image are provided. Users can save their favorite picture and access those same settings anytime in the future.

Additionally, once the app is installed, the “view images” option—in addition to editing functions such as adjusting aspect ratio and trimming images—allows music saved on a smartphone to be used as background music in a slideshow. And users can display (thumbnail, single-frame display) and delete images stored on the microSD card inserted in the Air A01.