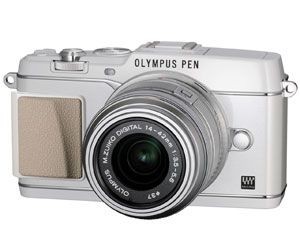 Center Valley, PA—Olympus marked the 50th anniversary of the PEN F with the launch of the PEN E-P5, a digital update of a classic film camera designed with performance advancements. The compact system camera delivers a 1/8,000-second shutter speed—a first for this class—built-in Wi-Fi, autofocus advancements, easy-access manual controls, quick start-up, a reduced time lag between shots of 0.044 sec and nine-frame-per-second sequential shooting.

The new flagship in the PEN series boasts an all-metal casing that houses many of the same technologies found inside Olympus’s premier Micro Four Thirds camera, the OM-D E-M5; these include a 16 megapixel TruePic VI Live MOS sensor, FAST AF and five-axis image stabilization that corrects camera shaking, whether shooting photos or recording movies. It also offers a 1.04-million-dot, tilt-type touch-panel LCD that can be adjusted upwards at an 80º angle and downwards at a 50º angle. For photographers who prefer composing their shots using an eyepiece, the new optional VF-4 viewfinder provides a 1.48x magnification, a 2.36-million-dot LCD, eye detect to turn it on at the right time, and real-time viewing of shooting conditions.

The E-P5’s mechanical shutter achieves a speed of 1/8,000 of a second to freeze fast-moving subjects like insects in flight or to create pictures with dramatic background blur, even in bright conditions. The built-in flash, with an improved 1/320-sec synch speed, makes it easier to take backlit shots during the daytime.

The camera’s new super spot AF was added to accurately bring into focus even extremely small subjects. Users select an area on a subject where pinpoint AF is required and the E-P5 can autofocus on that area.

Also new is IS-auto mode, which automatically detects the camera’s movements and provides optimal control of correction when panning regardless of direction or camera orientation. Users can press the shutter button halfway to check the image stabilization effects on the live-view display and then decide on the composition. The image remains on the display for two seconds after the shutter button is released, making it possible to stabilize the autofocus point and set framing.

The E-P5 is the first Olympus camera to include built-in Wi-Fi. To set up Wi-Fi, users scan the QR code displayed on the camera’s LCD with a smart device to synch it with the Wi-Fi network created by the camera. Olympus’s free smartphone app, Olympus Image Share 2.0, synchronizes the phone’s and the E-P5’s screens so users can see the camera’s LCD on the phone and control it by touching the smartphone display as if it were your camera. They can also count down to shutter release on the phone, grant friends’ devices access to selected images and use the smartphone to embed GPS information in photos.

A new creative feature is photo story mode, which lets users capture a scene from multiple viewpoints and combine them into a collage in-camera that can include a handwritten or original image signature on top of the image via the Oi.Share app. Other creative features include: interval shooting from one second to 24 hours; time-lapse movie to convert a series of pictures taken using interval shooting into a movie; 12 art filters; and an improved live bulb mode.

The Olympus PEN E-P5 is compatible with the entire Micro Four Thirds range of lenses, which includes newly introduced black versions of the M.Zuiko Digital 17mm f/1.8, 45mm f/1.8 and 75mm f/1.8 lenses. The PEN E-P5 is available for $999.99 body only, in black, silver or white, and $1,449.99 for a black or silver body with the black M.Zuiko Digital 17mm f/1.8 lens and VF-4 electronic viewfinder lens. olympusamerica.com