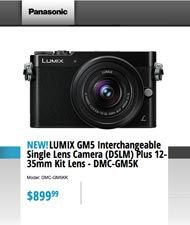 Taking advantage of its 16 megapixel Digital Live MOS sensor and Venus engine, the GM5 is said to produce images rendered with high resolution and color reproduction, even when shot in low light and its maximum ISO 25,600 sensitivity.

The compact system cameras contrast autofocus (AF) system is engineered for speed and accuracy, by exchanging a digital signal between the camera and the lens at max. 240 frames per sec. A range of AF functions includes new face/eye detection AF, low-light AF, pinpoint AF and one-shot AF to cover a range of shooting situations. In addition, the touch-control system used in the CSC’s 3.0-inch, 921K-dot LCD monitor in 16:9 ratio immediately lets users set focus to the subject by touching the screen and then release the shutter.

The GM5 features Full HD 1,920×1,080, 60p video recording in AVCHD progressive and MP4 formats with stereo sound and full-time AF and tracking AF. And there’s a cinematic 24p video setting with the bit rate of 24 Mbps. A new video option, snap movie mode, allows user to record for short periods of time (2/4/6/8 sec) as they shoot “moving photos.” It’s also possible to connect the clips later with a variety of interval fade effects and music.

Other creative functions include Panasonic’s creative control mode with 22 filter effects, in addition to time-lapse shot, stop-motion animation and clear retouch. For more manual photography, a time function (long exposure) was added to enable photographers to set exposure time to a maximum 60 sec.

Additional features include: a shutter speed of 1/16,000 for action photography; focus peaking; silent mode; highlight/shadow controls; a level gauge; and Wi-Fi connectivity. Photographers can connect the camera to their smartphone or tablet to use those devices as a multi-capable remote shutter with a monitor. With the GM5’s instant transfer function, photos are automatically sent to the smartphone/tablet immediately after shooting, and both images and video can be archived to the user’s registered digital equipment, such as a PC, automatically via a home wireless router.

Panasonic is bundling an external flash unit (GN7/ISO100･m, GN10/ ISO200･m) with the GM5 that mounts to its new hot shoe (in black or silver).

The Lumix DMC-GM5 is offered in black and red with synthetic leather. $899.99. panasonic.com