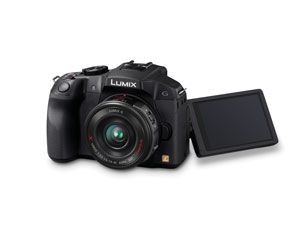 Secaucus, NJ—Panasonic’s newest digital single-lens mirrorless camera, the Lumix DMC-G6, offers Wi-Fi connectivity with NFC (Near Field Communication) technology, so users can connect the camera to their smartphone/tablet by bumping them together to share its captured photos and video.

It’s also possible to use a smartphone or tablet as a remote shutter with a monitor utilizing the Panasonic Image App for iOS/Android. With the G6’s instant transfer function, photos are automatically sent to the smartphone/tablet right after shooting. Shutter release, zooming, focusing and settings of shutter speed, aperture, exposure compensation are all controllable with a smartphone/tablet. In addition, photos and video can be archived to a registered device such as a PC automatically via a wireless router at home.

The Lumix G6 boasts a range of imaging features, including creative panorama, time-lapse shot, stop-motion animation and clear retouch, which lets users erase unwanted areas of a photo, in addition to creative control mode with 19 filter effects. The G6’s 16.05 megapixel Digital Live MOS sensor and new Venus engine achieve high-resolution, high-sensitivity capture with reduced noise for photos and Full HD 1,920×1,080, 60p video in AVCHD Progressive and MP4 formats with stereo sound. ISO settings top out at 25,600, and the G6 shoots at 7 fps (frames per second) at full resolution. In addition to full-time AF, the touch AF in video recording lets users enjoy professional-like track focusing. Just by pointing to the subject, the focus is shifted to it and tracking locks on the subject, even if it moves.

A 1,440K-dot OLED (Organic Light-Emitting Diode) live view finder offers a high-contrast ratio of 10,000:1, while the 3.0-inch free-angle monitor adopts In-Cell Touch technology. Other features include: iA mode for beginners, which provides a variety of automatic shooting-assist functions, such as AF tracking, intelligent D-range control, intelligent scene selector, face recognition and intelligent ISO control; iA plus mode, which lets users adjust a defocusing area in the background, exposure compensation and white balance; and the scene guide, which has 23 sample pictures shot by pro photographers from which users can choose the one closest to their conditions, and shooting parameters are automatically set.

Also, with Panasonic’s cloud service, Lumix Club, the G6 can automatically synchronize images via the Internet with designated devices and web services such as Facebook, Flickr, Picasa, Twitter or YouTube. The Wi-Fi Direct function even allows direct playback of images on DLNA-compliant Viera HDTVs.