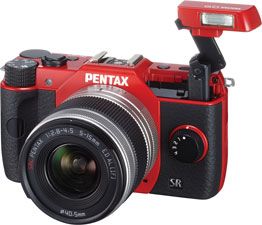 The super-compact, ultra-lightweight Q10, barely larger than a deck of cards, is engineered to produce digital SLR-quality photographs for shooters of all levels. Based on the Pentax Q launched in August 2011—“the world’s smallest, lightest digital interchangeable lens camera”—the Q10 features a newly adopted CMOS image sensor and an upgraded algorithm to provide users with improved performance, including higher quality images and faster autofocus operation.

The Q10 retains all of the creative features of its predecessor, including the bokeh control function to create a defocused effect typical of an SLR, the smart effect modes to apply one of nine effects with the turn of a dial, and 19 built-in digital filters. While its overall exterior design closely resembles the Pentax Q, which is a miniature version of a full-scale DSLR, the Q10 provides several upgrades in its body design, such as an improved grip for a more stable hold of the camera and color options.

“Not only does the new Pentax Q10 have a tiny footprint but it packs a powerful punch when it comes to picture taking, especially when compared to any smartphone or digital point-and-shoot camera,” said John Carlson, Sr., manager of Sales and Marketing, Pentax. “With the availability of a K-mount adapter for the Pentax Q-series of cameras, we have extended this camera category to fulfill endless photographic possibilities for Q users, who can now use any one of 25 million Pentax K-mount lenses with their Q system.” (Only manual focusing is available with K-mount lenses.)

The Q10’s newly designed back-illuminated CMOS image sensor is engineered to provide high-sensitivity and low-noise characteristics, to deliver 12.4 effective megapixels and a top sensitivity of ISO 6400. With high sensitivity noise minimized, photographers can use the entire sensitivity range from ISO 100-6400 for “sharp, clear images” and take advantage of the built-in HDR (High Dynamic Range) function, which produces a composite photo from multiple images to create detailed images free of whitewashed highlights and blacked-out shadows.

Additionally, the sensor works with an upgraded AF algorithm to give the Q10 autofocus operation that is much faster than its predecessor, even in dimly lit locations or with a telephoto lens. An AF-assist light is provided on the camera body to optimize focusing accuracy in the dark, while the face recognition AF function automatically detects up to 12 faces and pinpoints the focus on a main subject.

Also notable, by assigning the smart effect function to the quick dial on the camera’s front panel, photographers can easily add the desired finishing touch to an image while previewing the effect on the Q10’s 3.0-inch LCD. Photographers can assign four of their favorite effects from the nine smart effects to this dial; they also can assign other preferences, such as a custom image setting, a digital filter or an aspect ratio setting.

In addition to still photos, the Q10 records Full HD (1,920×1,080 pixels) video, employing the H.264 recording format, at a frame rate of 30 frames per second. Photographers can utilize smart effects and other in-body movie-editing tools during movie shooting, as well as autofocus operation. A micro-HDMI terminal (type D) allows the simultaneous output of Full HD movie clips and sound to external devices via a single terminal.

The Adapter Q for K-mount lenses was also introduced. This adapter makes it possible to use Pentax K-mount lenses on Q-series cameras, extending the lens by approximately 5.5 times in the 35mm format; for example, the smc Pentax-DA* 300mm f/4 ED [IF] SDM telephoto lens could be used as a 1650mm-equivalent super-telephoto lens. A mechanical shutter is incorporated in the adapter to prevent “rolling shutter distortion,” a problem that results in distorted images due to camera shake caused by photographing fast-moving subjects and/or by using a super-telephoto lens. An optional tripod bracket also is available to stabilize the camera system when longer lenses are attached.