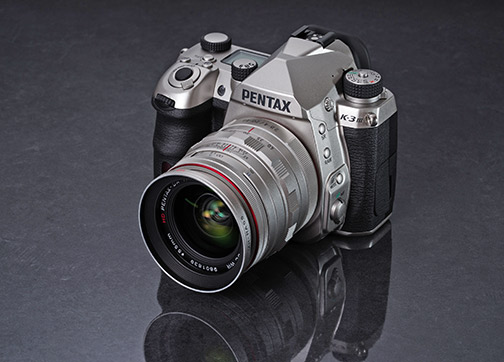 Parsippany, NJ—Ricoh Imaging Americas Corporation unveiled the Pentax K-3 Mark III. The new flagship APS-C-format digital SLR camera is designed around the Pentax  Principles. The DSLR offers advanced functions and enhanced imaging performance “with a goal of optimizing the fun and excitement of photography in a wide variety of conditions,” Ricoh announced.

“The development of the Pentax K-3 Mark III was a longtime labor of love,” said Kaz Eguchi, president, Ricoh Imaging Americas Corporation. “At Ricoh, our goal is to develop high-quality cameras with the power to capture images that speak louder than words and inspire photographers to continue pursuing their passion for photography every day.”

Moreover, the K-3 Mark III builds on the Pentax legacy of image quality, incorporating a 25.73-effective-megapixel back-illuminated CMOS image sensor. Coupled with an AA (antialiasing)-filter-free optical design, the camera produces super-high-resolution images. The camera’s AA-filter simulator, which reduces moiré patterns to the same level as an optical AA filter, applies microscopic vibrations to the sensor at the sub-pixel level during exposure. Unlike a conventional optical AA filter, the simulator provides on/off switching and level selection.

The DSLR incorporates an optical viewfinder with a nearly 100% field of view and 1.05x magnification. A high-refraction glass prism assures comfortable viewing with a wide field of view equivalent to that of a full-frame SLR. Also, by using a distortion-correcting optical element and optimizing the lens coatings, it delivers a true-to-life viewfinder image free of distortion. What’s more, its brightness is improved by nearly 10% over the Pentax K-3 II’s viewfinder.

The DSLR provides user-friendly shooting functions, as well as improved efficiency and operability over its predecessor. These include a 1.62M-dot, 3.2-inch touch-screen LCD monitor—the first touch screen in the Pentax K series. The screen allows intuitive operation of various functions, including scrolling menu selection and image zooming during playback. 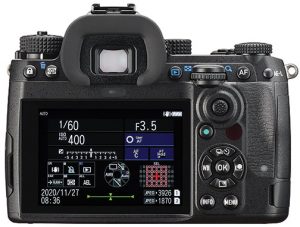 Moreover, the monitor’s air-gapless construction has a special resin material injected into the gap between LCD layers and a protective tempered-glass cover. This reduces reflections and the dispersion of light to improve visibility during outdoor shooting. The viewfinder eyepiece also protrudes away from the screen, so the user’s nose does not contact the camera. Additionally, at the bottom of the eyepiece is an eye sensor that turns the monitor off the moment the photographer looks into the viewfinder, preventing monitor illumination from affecting visibility.

Furthermore, the outdoor-friendly monitor has a night vision LCD display function. As a result, users may quickly adjust the monitor’s brightness level depending on conditions.

Another feature is the Pentax Real-time Scene Analysis system; it’s supported by artificial intelligence. The system detects a subject’s face/eyes using image recognition technology and makes a real-time analysis of the subject’s movement. As a result, it assists in optimizing exposure settings and improving autofocusing accuracy.

In addition, Pixel-Shift Resolution technology captures four images of a scene by shifting the sensor by a single pixel for each image. It synthesizes them into a single composite image. The system obtains all color data in each pixel to provide super-high-resolution images with more truthful colors and finer details. The camera also offers on/off switching of its motion correction function. It automatically detects only moving elements during continuous shooting and minimizes negative effects during the synthesizing process.

Furthermore, the DSLR features a new SAFOX 13 phase-matching AF module. It has 101 focus sensors, 25 of which are cross-type sensors positioned in the middle. As a result, it achieves focus on the subject at minimum brightness levels as low as -4 EV. Also, by using a high-capacity RGBIr image sensor with 307,000 pixels and a new tracking algorithm, the camera tracks subjects moving at varying speed or in irregular motion. Also, an AF point selector lever lets users select the desired focus point more intuitively (up to 41 points).

It also has a stereo microphone input terminal and headset terminal. Subsequently, users can manually set the audio recording level and monitor the sound pressure level for microphone input. And thanks to quiet touch-screen control on the LCD monitor, shooting function and exposure compensation levels are set without operational noise.

Other features include Pentax’s Hyper Operation system with an advanced mode for more flexible exposure control; an operation control lock function to prevent accidental errors of setting buttons and the four-way controller; an upgraded smart function with a dedicated button for selection of settings without using on-screen menus; a button customization function to assign functions to 10 control buttons; a DR II (Dust Removal II) mechanism; and also an HDR function.

In addition, the DSLR integrates Bluetooth and wireless LAN for connection with mobile devices. Consequently, when users install the dedicated Image Sync app in a mobile device, they can see live view images on the smartphone screen or capture images and change camera settings using the mobile device. The app also allows them to transfer images to a mobile device and upload them to SNS sites.

The camera also has a dual SD card slot, and its battery is rechargeable via a USB Type-C terminal.

The K-3 Mark III’s top, bottom, front and rear panels are made of lightweight, high-rigidity magnesium alloy and it features dust and weather resistance. It also provides cold-resistant performance for operation at 14°F. Supporting the rugged body is a shutter unit rated for 300,000 shutter-release actions.

Another optional accessory is the O-HC177 hot shoe cover for dressing up the camera. The stainless alloy cover integrates with the camera’s pentaprism part.

Ricoh will release the Pentax K-3 Mark III in late April, with preorders beginning on April 6 at 5 p.m. ET. The camera body will have a suggested retail price of $1,999.95. Ricoh will also offer two limited-edition kits: the Pentax K-3 Mark III black premium kit and the silver premium kit. These packages will comprise a camera body, a battery grip (the silver premium kit comes with a silver body and a silver battery grip), an exclusive leather strap and a spare battery. The premium kits will ship late April with SRPs of $2,299.95.