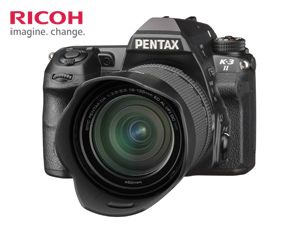 The camera combines an APS-C-size CMOS image sensor free of an antialiasing filter with the Prime III imaging engine—which is identical to the one used in the Pentax 645Z medium-format camera—to optimize the sensor’s imaging resolution. The system is also designed to minimize image-degrading noise generated at higher sensitivities, even at the top setting of ISO 51,200.

“The introduction of the Pentax K-3 II marks our commitment to providing photographers with rugged, high-quality solutions that exceed our customers’ expectations,” said Jim Malcolm, president of Ricoh Imaging Americas Corporation. The ‘magic’ we add to our cameras through the motion-controlled Shake Reduction (SR) technology helps our photographers shoot for the stars and capture images in stunning detail; no other manufacturer is offering such a variety of features in a single camera design.”

Building on the K-3’s dustproof and weather-resistant construction, and designed to stand up to the demands of location work, the K-3 II features a built-in GPS receiver, GPS log and electronic compass. The GPS system records shooting location, camera orientation and altitude, as well as provides a date/time stamp tied specifically to captured images. All of this data can be transferred to a computer and mapped using services such as Google Earth.

In addition, by combining its GPS positioning capabilities with in-body shake reduction, the K-3 II’s built in AstroTracer feature tracks and photographs astronomical bodies. It uses GPS and orientation location data together with magnetic and acceleration sensors to calculate the motion needed to synchronize the camera’s sensor with the movement of the stars. This makes it possible to capture stars as points of light rather than star trails during long exposures.

Compatible with a host of accessories, including flash units, lenses, a battery grip and interchangeable focus screens, the Pentax K-3 II will be available this month for a suggested retail price of $1,099.95. ricohimaging.com