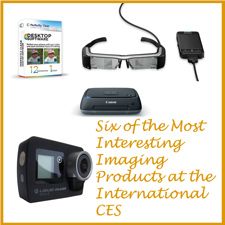 This year’s International CES was one sure sign that the economy is recovering. With more than 2.2 million square feet of exhibit space, 170,000 attendees and 3,600 companies exhibiting their products and services, the show featured all the latest and greatest that the electronics industry has to offer—to the point that it was overwhelming.

The show was spread out throughout the city, including the Las Vegas Convention Center, the Sands Convention Center and numerous resorts and hotels. Between the main showroom floors, preshow press conferences, the various evening product showcases and the numerous VIP suites, seeing everything was impossible. Even trying was exhausting.

There was a wide selection of digital imaging products, including DSLRs, lenses, and accessories: consumer digital cameras; printers and output devices; and a myriad of visually enabled devices for everything from camera-equipped drones to a host of Wi-Fi security equipment and surveillance smartphone apps that let you see who’s ransacking your home while you’re away on vacation.

Here are my selections for six of the most interesting imaging products on display at the 2015 CES.

Samsung NX1. On the professional photography side, Samsung really isn’t all that well known for DSLRs, but the company does have some remarkable, advanced mirrorless cameras, including the NX1. One of the things that sets the NX1 apart is speed. Designed around a 28.2 megapixel APS-C-size sensor, it can capture full-res images at an impressive rate of 15 fps, for up to 70 frames per burst. With its 1/8,000 of a second maximum shutter speed, the NX1 can freeze even extremely fast-moving objects. It has a high ISO of 25,600, expandable to 51,200, for striking low-light photography.

Besides still imaging, the NX1 can record video in true 4K, which is 4 times the resolution of Full HD. It supports the H.265 codec, which captures extreme details while requiring only half the memory space of the conventional H.264 codec. That’s a lot of camera for $1,499.99, body only. samsung.com

Panasonic Lumix DMC-ZS50. One aspect in photography where a lot of progress is being made is integrating long telephoto lenses into consumer cameras. There are some models that have a 60x or more telephoto range. But one of the smallest, slimmest high-end cameras with an ultrazoom lens is the Panasonic Lumix ZS50. It’s a camera that can easily fit into a shirt pocket but still has an integrated 30x Leica DC Vario Elmar optical zoom lens. That gives it a 35mm equivalent coverage of 24–720mm. Its digital zoom doubles the effective range to 60x, or 1440mm, while maintaining very high quality.

The ZS50 is designed around a 12.1MP High Sensitivity MOS sensor for very effective low-light photography. It comes equipped with an advanced 5-axis hybrid optical image stabilizing system, which is important when taking photos and videos in the ultrazoom mode or shooting in low light. For more serious photographers, the ZS50 can capture images in RAW format, and it supports Wi-Fi image transfer. It has a suggested retail price of $399.95. panasonic.com

Liquid Image 800 Ego LS. There was a particularly strong interest in action cams at the show. Liquid Image (the company that has made a name for itself with underwater cameras that are integrated into goggles and helmets and those for winter sports) came up with a land-based camera, the 800 Ego LS. The small action cam not only lets users capture Full HD video and still images, it also lets them stream content live over 4G LTE and Wi-Fi networks. It’s also Bluetooth enabled. It can capture 1080p video at 30 fps, 720p video at 60 fps and still images at up to 8MP, all using its 135º wide-angle lens.

It has continuous still image shooting capabilities at 8, 5 and 3MP. Battery power should last for 24 hours in the low RF mode. Besides streaming downloads of captured video and still images, the 800 Ego LS can also store digital content on microSDXC cards up to 64GB. It sells for $399.99 and should be available by spring 2015. liquidimageco.com

Wearables, technology integrated into clothing and accessories, were also big this year. Logitech even had an ongoing fashion show set up that highlighted some of its products on the monorail platform at the Las Vegas Convention Center.

Epson Moverio BT-200. Epson showed its Moverio BT-200 smartglasses, which are basically a set of glasses designed to augment reality. They’re a true binocular display utilizing a miniaturized LCD-based projection lens system and optical light guide in each side of the glasses. The system projects see-through overlays of digital content onto the real-world in the center of the glasses’ field of view. Content is viewed on a “floating” 80-inch perceived screen.

The lightweight device’s sensors enable head-motion tracking and hands-free navigation while a front-facing camera is available to capture video. With Wi-Fi connectivity, a microSDHC slot in the control unit and 1GB of internal memory, they can also be used to view streaming content. Users can download content, games and apps via the memory card. At $699.99 retail, they’re about half the price of Google Glass. epson.com

Canon Connect Station CS100. One of the objectives of evolving technology seems to be to free the average user from the shackles of a desktop PC. Canon showed an interesting new device, the Connect Station CS100, that’s designed to do just that. The CS100 is a desktop box with 1TB of internal storage, Wi-Fi connectivity and an HDMI port to connect to an HDTV set. It simplifies digital image and video viewing, transfer, organization, storage and sharing, without ever putting the images onto a computer or, for that matter, sending them to some nebulous cloud storage service.

With NFC-equipped Canon cameras or camcorders, transferring new digital content to the Connect Station is as easy as tapping the two together. It’s just a matter of holding the capture device close to the CS100 to automatically import new photos and videos. The unit automatically recognizes previously imported photos and videos, so there’s no duplication. It also includes a USB port and a card slot for traditional image transfer. And the device allows users to view, upload and download images from smartphones, tablets or PCs using a web browser. A remote unit provides a variety of options for what to do with the images once they’ve been downloaded. Priced at $299.99, it’s scheduled for June 2015 availability. usa.canon.com

Athentech Imaging Perfectly Clear Desktop. There were numerous smartphone apps targeting consumer picture takers. Some optimized the images, some made it easier to organize, store or share them. But there really weren’t a lot of programs targeting serious digital imaging. Perfectly Clear Desktop from Athentech Imaging did. Transforming and expanding on the power of its sophisticated Perfectly Clear and Beautify Photoshop plug-ins, the stand-alone version, which is still in beta, doesn’t require a host program.

It’s advanced algorithms and facial recognition technology apply 12 automatic corrections to digital images that are designed to overcome the way that cameras distort images and automatically enhance JPEG and RAW images. With a single click, it’s possible to batch optimize hundreds (even thousands) of digital images at one time. If you’re interested in becoming part of the beta testing program, it’s still open at athentech.com/downloads/desktop.