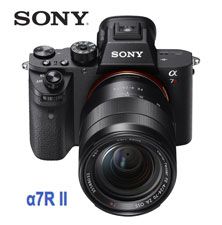 The camera employs a 5-axis image stabilization system and can record 4K video in multiple formats, including Super 35mm (without pixel binning) and the full-frame format—said to be a first for digital cameras.

“Sony continues to deliver game-changing imaging products that are changing the way imaging enthusiasts, hobbyists and professionals can see and capture the world,” said Mike Fasulo, president of Sony Electronics.

The sensor combines a gapless on-chip lens design and an antireflective coating on the surface of its glass seal to improve light collection efficiency—to produce high sensitivity images with low-noise and wide dynamic range. This allows the camera to shoot at an ISO range of 100–25,600, which is expandable from ISO 50 to 102,400.

Image data can be output from the sensor at an approximately 3.5x faster rate than the original α7R, utilizing the high-speed Bionz X image processor. There is also no optical low-pass filter, to help ensure that images are captured in the highest possible resolution and clarity.

A total of 399 focal-plane, phase-detection AF points are positioned on the new image sensor, and they work with 25 contrast AF points to achieve focus response that is 40% faster than the original model. Additionally, the α7R II uses a motion-detection algorithm combined with its hybrid AF system to achieve up to 5-frames-per-sec continuous shooting with AF tracking.

Also featured is a reduced-vibration shutter that produces 50% less vibration from shutter movements compared to its predecessor. It has a cycle durability rated to 500,000 shots. The camera can also be set to silent shooting mode in order to shoot images without any sensor vibration or movement.

The α7R II’s 5-axis image stabilization system corrects camera shake along five axes during shooting: angular shake (pitch and yaw) that tends to occur with a telephoto lens; shift shake (X and Y axes), which becomes noticeable as magnification increases; and rotational shake (roll) that often affects video recording. This shake compensation system is equivalent to shooting at a 4.5-step faster shutter speed. Plus, the IS system works with Sony α lenses with optical SteadyShot (OSS), while also performing via a compatible mount adapter with Sony α A-mount lenses without onboard stabilization. Effects of the stabilization can be previewed via live view on the camera’s LCD or OLED viewfinder.

Video features include the capability to record 4K (QFHD 3,840×2,160) movies in Super 35mm crop mode or full-frame mode. In Super 35mm mode, the camera collects information from approximately 1.8x as many pixels as 4K by using full pixel readout without pixel binning and oversamples the information to produce 4K movies with minimal moiré and ‘jaggies.’ In full-frame mode, it uses the full width of the 35mm sensor for 4K recording.

Video is recorded in the XAVC S7 codec at a bit rate of 100 Mbps during 4K recording and 50 Mbps during Full HD. For a professional video workflow, the α7R II offers Picture Profile, S-Log2 Gamma and S-Gamut functions, 120-fps movie shooting in HD (720p), time code and clean HDMI output.

Also notable is the camera’s upgraded XGA OLED Tru-Finder. Its double-sided aspherical lens is designed to deliver a high viewfinder magnification of 0.78x for clear image preview and playback. Zeiss T* coating is also utilized to reduce reflections that interfere with the shooting experience.

For sharing, the magnesium-alloy camera provides Wi-Fi and NFC connectivity and works with Sony’s PlayMemories Mobile apps (Android/iOS platforms) and Sony’s range of PlayMemories Camera apps, which add creative capabilities to the camera. For example, there is more creativity available now for time-lapse photography thanks to a new “angle shift add-on” app that allows users to add pan, tilt and zoom to time-lapse images without any additional shooting equipment or PC software required.

Sony’s α7R II full-frame, interchangeable-lens camera will be available in August for $3,200. sony.com