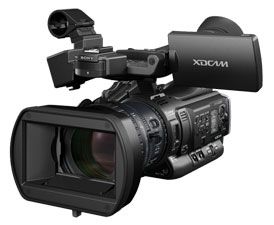 The first 35mm large-sensor professional camcorder to feature both servo-controlled zoom lens capability and an APS-C image sensor, the camcorder is designed to give users creative freedom when shooting Full HD video and high-quality still photos.

“This all-in-one camcorder will bring enhanced creativity to a wider range of professional users than ever before,” said Chiyoko Yannette, senior marketing manager at Sony Electronics’ Professional Solutions of America group. “It combines affordability and high performance with versatile, professional features for nearly any type of production applications.”

The camcorder’s sensor is engineered to produce 16MP images with low noise and high sensitivity in low-light conditions. It enables 1080 progressive and interlace recording with 60/50Hz selection (50p/25p/50i or 60p/30p/24p/60i).

Not only would its sensor be at home in the body of a DSLR, but the NEX-EA50UH features a dedicated shutter release button, a mechanical shutter to eliminate rolling shutter artifacts and a hot shoe for using traditional flash units. The camcorder also incorporates Sony’s E-mount interchangeable-lens system, which enables autofocus, autoexposure and optical stabilization during video shooting. With its short flange back distance, users can attach not only A-mount lenses via the LA-EA2 lens mount adapter but also a choice of other brand lenses using third-party adapters.

The NEX-EA50UH’s newly developed E PZ (power zoom) 18-200mm f/3.5-6.3 OSS lens offers autofocus, continuous variable iris and optical SteadyShot image stabilization with active mode. It is electronically controlled by both the zoom rocker lever on the camcorder grip and the camera handle, as well as by the rocker on the lens itself and also via LANC remote controllers.

Sony’s NEX-EA50UH camcorder will be released in October at a suggested list price less than $4,500. sony.com