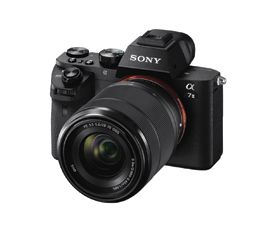 “The new α7II is simply the latest example of the impressive innovation we’re bringing to the industry, particularly in the mirrorless space,” said Neal Manowitz, director of the α interchangeable-lens camera business at Sony. “We’re continuing to push the boundaries of what can be accomplished with a full-frame sensor, consistently delivering ‘world’s first’ technologies that no other cameras—DSLR or otherwise—can accomplish.”

The five-axis image stabilization on the α7II was developed to detect and correct camera shake along five axes during shooting. These include angular shake (pitch and yaw) that tends to occur with a telephoto lens; shift shake (X and Y axes), which becomes noticeable as magnification increases; and rotational shake (roll) that often affects shots at night or when recording video. The image sensor moves to accommodate all of these types of shake, with stabilization said to be equivalent to up to 4.5 steps faster shutter speed of correction.

Additionally, the IS system works cooperatively with Sony α lenses with optical steady shot (OSS), while also performing with Sony α A-mount lenses and third-party lenses without onboard stabilization. Effects of the stabilization can be previewed via live-view on the camera’s LCD or OLED viewfinder.

The α7II also utilizes an improved autofocus system with a 117-point, focal-plane, phase-detection AF sensor with 25 contrast-detection AF points. The system is said to deliver 30% faster AF responsiveness and 1.5x more accurate subject tracking than the original α7 model, thanks to new algorithms for detecting subject distance and predicting motion. Additionally, AF and autoexposure (AE) are provided while tracking subjects during high-speed continuous shooting at up to five frames per sec.

The camera also shares the latest Bionz X image processor with other high-end Sony cameras, and it adds advanced video functionality, such as use of the XAVC S5 codec, which records video at a high data rate of 50 Mbps with advanced compression.

For the professional and prosumer customers, the α7II offers picture profiles for convenient in-camera tone adjustments and supports the S-Log2 gamma function that preserves a wide dynamic range. It also includes time code (useful for editing), rec control (for synced recording with an external recorder) and dual video recording.

Ergonomically, compared to the original α7, the α7II model has a larger shutter button that has been moved closer to the front of the camera for optimal finger positioning. It is constructed with magnesium alloy on the top, front cover and internal panels for a more solid feel and boasts a 40% faster start-up time that the α7.

Other features include: Full HD video recording; Wi-Fi and NFC compatible and fully functional with Sony’s PlayMemories app (Android/iOS); a 2.4M-dot electronic viewfinder; and a 3.0-inch, high-res, tiltable LCD screen. New accessories designed for use with the α7II include the VG-C2EM vertical grip and LCS-ELCB soft carrying case.

New α A-mount Lenses
Sony also introduced a new telephoto zoom lens for its α A-mount line, the 70–300mm f/4.5–5.6 G SSMII (model SAL70300G2). Targeted at outdoor sports and wildlife photography, as well as tightly cropped portraits, the lens features 4x faster AF tracking than the current lens model 70–300mm f/4.5–5.6 G SSM. It also has Nano AR coating to minimize flare and ghosting and improve rendering, and it is dust and moisture resistant. The lens will be available in February 2015 and will retail for $1,150.

In addition, Sony announced the development of the α A-mount Vario-Sonnar T* 24–70mm f/2.8 ZA SSMII and the Vario-Sonnar T* 16–35mm f/2.8 ZA SSMII lenses. The second generation of these lenses will improve upon the speed of AF tracking, reduce flare and ghosting, and incorporate a dust- and moisture-resistant design. While pricing for these two lenses has not been determined, they are schedule to reach retail in sprint 2015. sony.com