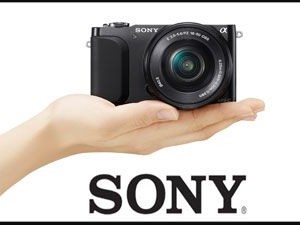 San Diego, CA—Sony’s Alpha NEX-3N compact system camera is engineered to deliver pro-quality photos and Full HD video in an ultracompact body weighing in at under 7.5 ounces, and Sony claims it is “the world’s smallest and lightest interchangeable-lens camera with an APS-C size sensor.” Three enhanced Cyber-shot point-and-shoots models were also announced.

The NEX-3N will be offered as a kit with the compact SELP1650 motorized zoom lens. The camera itself features a newly added zoom lever on top to provide smooth fingertip control of lens focal length. The lever can also adjust digital zoom on the camera if a powered zoom lens is not being used.

Its 16.1 megapixel APS HD CMOS sensor is identical in size to those found in traditional DSLRs. Its large surface area takes in more light during image capture, aiding in producing low-noise photographs with blurred backgrounds and detailed Full HD videos (60i/24p)—and providing a maximum sensitivity of ISO 16,000 for low-light performance. And, the camera’s Bionz processor, which utilizes the same area-specific noise reduction technology on Sony’s full-frame 99 DSLR, individually adjusts level of noise reduction and sharpness in different imaging areas, helping to assure low-noise handheld shots in all types of lighting situations without loss of detail.

“The new NEX-3N is the ideal camera to introduce consumers to the creative world of interchangeable-lens photography, offering new levels of performance and convenience never before realized in a mirrorless model,” said Mike Kahn, director of the Alpha business at Sony. “By pairing the camera with our retractable SELP1650 lens, loading it up with a host of our newest, most advanced technologies and offering it at a great price point, we’ve created a palm-sized powerhouse that promises outstanding value for our customers.”

New here is Auto Object Framing technology, which enables shooters to create framed photos with each composition. It identifies the main object of the framed scene—whether it’s one person, two people or macro and moving subjects—and automatically trims the scene around the object to create a professionally styled composition. The cropped photo is boosted to full resolution using Sony’s By Pixel Super Resolution technology, and both the original and cropped image files are saved.

Other NEX-3N features include: a 3.0-inch LCD screen that flips 180º; an easy-to-hold textured grip; and it is the first Sony E-mount interchangeable-lens camera to support “TriLuminos Color,” which was developed to enable consumers to experience an expanded palette of ultrarealistic colors when videos and photos are played back on a Bravia TV.

Sony’s NEX-3N compact system camera will be available this April in black and white in a kit with the motorized 16–50mm zoom lens (model SELP1650) for $500.

Sony is expanding the range of its Cyber-shot point-and-shoot camera line with one of the smallest, lightest 20x optical zoom compacts (DSC-WX300), a 50x megazoom model (DSC-HX300) and a waterproof compact (DSC-TX30).

Each of the models features improved imaging technologies to make is easier to capture the action in all types of shooting environments, from low light to outdoor scenes and underwater adventures. These include improved superior auto mode that automatically adjusts camera settings in all lighting situations, even if a subject is moving.

Cyber-shot DSC-WX300. Billed as “the world’s smallest and lightest digital still camera that packs a powerful 20x optical zoom range” and a “perfect pocketsize travel partner,” the WX300 utilizes a Sony G lens that handles wide-angle landscapes, portraits and close-ups. It also has Optical SteadyShot image stabilization to reduce the effect of hand shake, and image stabilization during zoom is now about twice as effective compared to previous Sony 20x optical zoom cameras. It’s enhanced by active mode, which works to produce steady handheld movies at all zoom ratios.

Other WX300 features include: 3.6x faster autofocus than on previous WX models; better battery life (500 photos on a charge, CIPA); and built-in Wi-Fi capabilities using Sony’s PlayMemories Mobile app (Android and iOS platforms) to wirelessly transfer photos and videos to a connected smartphone or tablet. It also allows a connected device to be used as a wireless remote to control the camera, and photos stored in the camera can be viewed wirelessly on a networked TV. The WX300 will be available in April. $330.

In a first for the Cyber-shot line, the HX300 features newly enhanced Optical SteadyShot image stabilization that improves framing and composition at high zoom settings. This is made possible by a second zoom group of lens elements that shifts to correct for the slightest hand movements. The HX300 also has improved high-speed autofocus at telephoto settings that locks onto subjects twice as fast as its predecessor, the HX200V.

Other HX300 features include: a balanced DSLR-style body; a molded ergonomic grip; intuitively placed controls, including manual ring, custom button, jog dial and memory recall mode; and a multi-terminal that allows communication between the camera and compatible accessories. The HX300 retails for $500.

Cyber-shot DSC-TX30. For swimming, snorkeling, skiing or any other kind of outdoor activity, the Cyber-shot TX30 has s 5x optical zoom lens and is waterproof to a depth of 33 feet, dustproof, shockproof and freezeproof. It also provides the new magnifying glass plus mode that zooms in for a supersize magnification (15x) of close objects. There is also an LED light surrounding the lens for adding light to close-up shots. The TX30 has an SRP of $350. sony.com