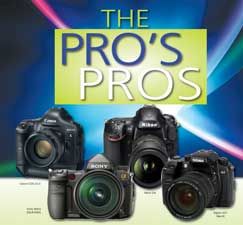 Typically cameras in the second pro tier, like the awesome new Canon EOS 5D Mark III and Nikon D800, or serious enthusiast models such as the ingenious Sony SLT-A77, are the tech leaders, providing advanced features that may not be found in more expensive top-of-the-line models. The latter score on sheer body build, super-ruggedness, dependability and comprehensive weather sealing. However, as someone once said, “The times they are a-changin’,” and today Nikon’s and Canon’s indestructible flagships offer such high tech as 10- or 12-fps rates with full functionality, multiple Full HD movie formats, state-of-the-art image processing, and ultra-advanced metering and autofocus systems that provide extraordinary AF/AE performance using superior subject identification ability.

If there is one clearly emerging trend here it’s that today’s most advanced top-tier models are pushing the performance envelope to include broadcast-quality video options as well as high-res and sizzling framing rates, and that multiuse, multimedia and multiconnectivity are the wave of the future. All four members of the illustrious upscale quartet detailed here offer something special and distinctive—at this level you don’t find clones or price-point cameras.

From a dealer’s perspective, top pro DSLRs have several characteristics that make them an attractive proposition. With street prices ranging from just under $3,000 to around $7,000, they’re big-ticket items in their own right, and it certainly pays to cultivate the customers who purchase them. And pros and ultra-serious well-heeled enthusiasts also tend to acquire fast, high-end, pro-caliber lenses like 24-70mm and 70-200mm f/2.8s, state-of-the-art lighting systems, high-speed, high-capacity memory cards, high-end tripods, etc. That’s why targeting a professional-caliber clientele simply makes good business sense. Another often overlooked factor that top pro DSLRs have, with rare exception, is a much longer shelf life than their second-tier or prosumer counterparts.

To serve this class of consumers effectively, there’s no substitute for a knowledgeable sales staff. That’s why it pays to take advantage of seminars and other educational programs offered by the leading camera manufacturers, and generally to provide opportunities for your staff to stay on top of the latest technology.

Let’s take a closer look at four of the leading top-tier contenders.

Sony Alpha DSLR-A900
Introduced nearly four years ago, Sony’s formidable pro DSLR seems like an old warhorse by contemporary standards, but that’s because other makers have finally caught up with its advanced technology. The A900 still sets the standard in its price class with a full-frame 24.6 megapixel Exmor CMOS sensor, a rugged and remarkably compact weather-sealed body, a brilliant 100% high-eye-point viewfinder and built-in SteadyShot Inside image stabilization that provides a 3- to 4-stop advantage in handheld shooting.

It has been widely rumored that Sony is planning to unleash a blockbuster full-frame pro DSLR based on its Translucent Mirror technology by the end of the year. In the meantime, the A900 is still available, and Sony shooters looking for a 12-fps framing rate and Full HD 1080p video capture with phase-detection AF can mount their Sony and Zeiss lenses on the serious enthusiast Sony SLT-A77. sony.com

Other upgrades include dual True II image-processing engines, an 11-point twin-cross AF sensor system and a 3.0-inch LCD, all built into an upgraded magnesium body with O-ring-sealed buttons and enhanced weatherproofing. Key performance upgrades include a maximum burst rate of 5 fps, a shutter rated for 100,000 cycles, ISO settings to 6400 and shutter speeds to 1/8,000 sec. While the SD1 lacks live view, video capture, dual card slots or tethering capability, it does offer such pro-oriented features as micro AF adjustment, three custom mode settings on the exposure mode (PASM) dial for storing various patterns of functions, quick-set menu options and an easily removable IR filter for infrared shooting.

Where the Sigma SD1 Merrill really shines is in its imaging performance, especially at low ISOs, in the ISO 100-400 range where it delivers images with a distinctive and gorgeous film-like character that capture exquisite detail and superb color rendition. At its best, the SD1 definitely equals, and may even edge out, the imaging performance of some full-frame models from major makers. It is a well-made, competent, pleasant machine that can do a few things so extraordinarily well that many will gladly forgive its foibles. And at its new lower price it represents an outstanding value. $2,299, body only. sigmaphoto.com

Canon EOS-1D X
Canon’s extraordinary new EOS-1D X is a full-frame 18.1MP DSLR built to the highest professional standards, with a 400,000-cycle shutter and weather-sealed cast magnesium body. Its signature features: It achieves a technological first—a remarkable 12-fps full-res burst rate with full AF/AE functionality along with a brilliant optical pentaprism viewfinder, and it can even shoot at 14 fps with the mirror locked up. What makes this possible is an ingenious new quad-action mechanical mirror design that provides positive mirror actuation in both directions, literally pulling the mirror down, holding it in viewing position for microseconds, and then pulling it upward, all at incredible speed. The system doesn’t use springs and that’s why it can reduce the mirror-cycling time from about 80ms in a typical high-speed pro DSLR to a mere 50ms.

Nikon D4
While the spectacular new Nikon D800 may capture more megapixels (36.3MP), the full-frame, FX-format 16.2MP Nikon D4 is definitely, as Nikon aptly puts it, a “total professional imaging machine,” and the larger pixels on its 36×23.9mm CMOS sensor provide distinct real-world advantages. In conjunction with its advanced Expeed3 image processor, the D4 delivers ISO settings as low as ISO 50 and as high as a staggering ISO 204,800 for vastly extended low-light performance. And it can shoot at burst rates up to 10 fps for an amazing 200 shots! Even more important in today’s multimedia environment, it can capture broadcast-quality Full HD 1080p video at 30 or 24 fps and shoot video clips up to 29 minutes, 59 seconds long, in FX, DX formats (1.5x crop) and the new 1,980×1,080 crop mode (2.7x) for maximum optical and framing flexibility. Other useful tricks: You can view simultaneous live view output on external monitors and record uncompressed video via HDMI, bypassing the memory card.

Additional high-end D4 specs include: 91,000-pixel RGB 3D color matrix metering III that integrates with more responsive 51-point AF for superior AF/AE and tracking performance; a 3.2-inch, 921k-dot LCD with auto brightness control; a 400,000-cycle shutter with mirror balancer to minimize bounce; and support for the new Nikon T-5A wireless transmitter. As you’d expect, it’s all housed in an ultra-rugged magnesium alloy body with comprehensive sealing to protect against moisture, dust and even electromagnetic interference. Did we mention it provides auto HDR, lets you check sound levels while recording audio and even has a self-diagnostic shutter monitor that automatically detects and corrects shutter speed errors before they occur? $5,999.95, body only. nikonusa.com