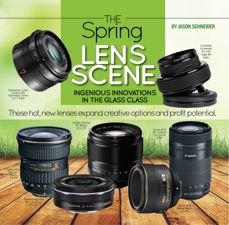 While the imaging world has been transfixed by awesome developments in sensor and image-processing technology, the 4K video revolution and advances in on-sensor phase-detection AF, an equally impressive transformation has been taking place on the optical front.

In the past two years, literally hundreds of interchangeable lenses were introduced, spanning every format from compact system cameras, APS-C and full-frame DSLRs and digital medium format. This optical explosion not only enhances the range of creative opportunities for picture takers, from casual shooters to pros, it also expands your profit potential.

In analyzing the latest entries, several trends emerge. As shooters become more sophisticated, creative expression and the esthetic quality of the image have come to the fore, and this has resulted in a renewed interest in wide-aperture prime (single focal length) lenses that create beautiful bokeh effects using limited depth of field at apertures in the f/1.2–2.8 range. Virtually every major lens manufacturer has jumped into the fray and offers an enticing assortment of high-speed primes covering all formats.

At the other end of the spectrum, zoom ranges are steadily increasing, and there are several new ultra-long telephoto zooms as well as long-range, wide-to-telephoto zooms that are wider at the wide end and provide unprecedented overall zoom ranges. Other notable lens trends are: flat, ultracompact wide angles and wide-angle zooms; high-performance lenses, often at premium prices; lenses with built-in, ultraquiet stepping motors for shooting video without focusing noise; and creative lens accessories that let shooters put the zone of sharpness where they want it.

Perhaps the greatest thing about lenses is they’re “keepers” that migrate to the next, more advanced camera body as customers upgrade to take advantage of the latest technology. As a result, lenses have a higher resale value than cameras and a higher perceived value among consumers. Indeed, lenses are considered long-term investments that will pay dividends going forward, and that’s one reason the optical sector is one of the healthiest, most dependable niches in the digital marketplace.

A Compendium of Innovative Lenses
Nikon: A pair of high-speed primes for FX/DX formats
AF-S Nikkor 58mm f/1.4G. This ultra-high-performance f/1.4 normal lens for full-frame FX Nikon DSLRs revives a classic focal length that goes back to the Nikon F’s earliest days, and it works as a moderate 87mm-equivalent telephoto on DX (APS-C) format Nikons. It has two aspheric elements, Nano Crystal and Super Integrated coatings, virtually no coma or light falloff, apertures from f/1.4–16, a rounded nine-blade diaphragm for smooth transitions and beautiful bokeh, and a silent wave motor. $1,699.95.

M.Zuiko 25mm f/1.8. A standard (50mm-equivalent), high-performance, high-speed prime lens optimized for low-light performance, it offers limited depth of field at wide apertures to separate the subject from the background. It has two aspheric elements for enhanced sharpness and aberration correction, a seven-blade circular diaphragm for artistic bokeh and a quiet MSC autofocus system for shooting HD video. $399.99. olympusamerica.com

Sigma: A high-speed prime lens and a macro
50mm f/1.4 DG HSM/A. One of the highlights of Sigma’s Art lens lineup optimized for creative imaging, this autofocus lens for full-frame and APS-C-format DSLRs is aimed at photographers who want to create beautiful pictorial effects at wide apertures, and shoot in low light. This highly corrected lens incorporates a silent and responsive HSM (hyper sonic motor) that provides full-time manual focus override. It will be available in Canon, Nikon, Sony and Sigma mount. TBA.

18–200mm f/3.5–5.6 DC Macro OS HSM/C. In Sigma’s Contemporary line, this lens for APS-C-format DSLRs provides a 29–320mm equivalent, 11x zoom range as well as true macro capability down to 1:3. Its double-sided aspheric elements allow for an extraordinarily compact design. Other features include: a built-in optical stabilizer (OS) to eliminate the effects of camera shake; an HSM for enhanced speed and responsiveness; a seven-blade rounded diaphragm for smooth out-of-focus transitions; and a durable brass bayonet mount. It comes in Canon, Nikon, Sony, Pentax and Sigma mounts. $399. sigmaphoto.com

Luxurious Leica M-system lens from Germany
Leica APO-Summicron-M 50mm f/2.0 Asph. For Leica M-series rangefinder cameras, it’s touted as the best-performing 50mm lens ever offered in (albeit limited) series production. Despite its breathtaking price of more than $7k, it’s sold amazingly well and has been on constant back order. Claimed to capture the finest details even at maximum aperture, its MTF performance readouts are astonishing, and its distortion and light falloff are said to be virtually imperceptible. Who needs such a lens? Well-heeled fanatics and those who want to get the ultimate image quality out of their Leica Monochroms and M9s! $7,350. us.leica-camera.com

Lensbaby: Something different and inventive
Composer Pro with Edge 80 Optic. This ingenious selective focus system combines the Lensbaby Composer Pro with the new Edge 80 optic. The Composer Pro provides a tilt/shift action that lets users achieve selective focus on various parts of the scene and has an enhanced ball-and-socket joint that tilts up to 17.5º and retains its position once set. The Edge 80 Optic is made of multicoated glass, provides a flat imaging field and works like a standard 80mm lens when it’s not tilted. But when it’s tilted, it provides a thin slice of sharp focus through the image. For maximum creative image control and flexibility, it features a nearly circular 12-blade aperture with a range of f/2.8–22 and a macro function that focuses as close as 17 inches. $399.99. lensbaby.com