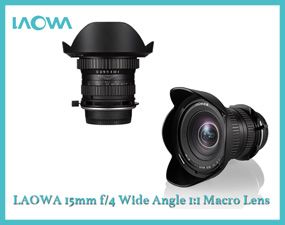 Most macro lenses on the market tend to have a mid to long focal length that limits users to take very close-up shots of, for example, an insect or flowers, without showing much of the background details like its habitat. The Laowa 15mm f/4 1:1 Macro features a 110º angle of view with a 1:1 maximum magnification, so photographers can focus very close to the subject and let the foreground dominate in the photo while having the background tell viewers about where and how the subject lives.

The lens can also serve as an ultra-wide-angle lens with infinity focus for cameras with full-frame sensors. A shift mechanism at the rear end of the lens offers a maximum adjustment of +/-6mm, which is useful for distortion correction when shooting landscape and architecture photography.