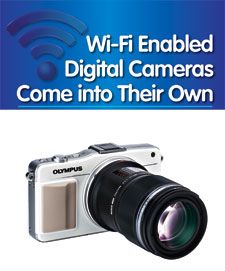 There are literally millions of images and video clips uploaded to the Internet and shared among friends every day. At one point, not all that long ago, transferring and sharing electronic files was a cumbersome multistep process. Visually enabled cell phones changed all that. Now, it’s simply a matter of point, click and send.

While smartphones offer extreme image upload convenience, the main problems with digital images and video clips captured by phones are the lack of quality and the limited resolution. Photographers, even casual photographers, want the quality and resolution that only digital cameras provide, with the same ease of uploading files to their favorite online destination and sharing them with friends that they have with phones.

That’s where Wi-Fi enabled digital cameras come in. They have all the features, capabilities, resolution and quality of any other digital camera, while providing the file-transfer simplicity and sharing capabilities of mobile phones.

But not all these Wi-Fi cameras are created equal; there are different types of Wi-Fi file-transfer support. With some cameras, the capabilities are built directly into the unit, and there are some that require proprietary add-on adapters to facilitate transfer. Then there are some that were designed with Wi-Fi image transfer in mind but require special wireless-capable Secure Digital memory cards.

Wi-Fi cards are becoming increasingly common. There are a number of companies that manufacture them. One of the leading providers is Mountain View, California-based Eye-Fi Inc. According to the company, more than 500 million images have been transferred wirelessly with their cards since 2005. And that number is growing every day.

Eye-Fi offers 4, 8 and 16GB versions of its Wi-Fi cards for seamless image uploading. The high-end card supports such advanced features as wireless RAW file format transfer and Wi-Fi based geotagging.

While in the past, there were some missteps with Wi-Fi cameras, today’s Wi-Fi enabled digital cameras make it easy to share images online. They let users share shots and clips on social network sites such as Facebook, Instagram, YouTube and Twitter with very little effort. And, they enable image storage to that nebulous cloud that everybody is talking about.

Transferring images to the cloud or other devices as they’re being taken, rather than storing them in the camera and transferring them later, lets users continue shooting with virtually endless camera storage space, regardless of how much actual space is on the card. The images are continuously rolled onto a distant server, local computer or other device with a higher storage capacity (which is sometimes referred to as endless memory).

The range of digital cameras that support Wi-Fi image transfer is quit extensive. Many of the major camera manufacturers have Wi-Fi enabled digital cameras on the market. Most of the models are consumer cameras, but there are some higher end cameras available that are Wi-Fi Certified.

Samsung, one of the pioneers in Wi-Fi enabled cameras, has been offering models that use a Wi-Fi connection to upload photos or videos instantly to social networks like Facebook, Picasa and YouTube for some time. And, of course, the company recently launched the Samsung Galaxy camera, which runs on Android 4.1, Jelly Bean, and has 4G mobile Internet connectivity—but that’s a camera of a different ilk. In their more “traditional” camera portfolio, Samsung offers Wi-Fi in its NX100 and NX20 compact system cameras, as well as the WB850, MV900 and DualView DV300, among others, in its Smart point-and-shoot camera series.

Samsung recently upped the ante with its EX2F Smart P&S—a very competent camera that boasts a 24mm wide-angle lens with a bright f/1.4 aperture that delivers even in very low light, a 12 megapixel BSI CMOS sensor, a 3.0-inch swiveling AMOLED display, full manual control as well as aperture and shutter priority modes, a dual dial and front wheel keys to adjust exposure for effortless manual control, and 1080p video recording. With integrated Wi-Fi connectivity, the EX2F enables users to connect to wireless networks without additional cards or devices, making it seamless to share and store photos and video directly from the camera to social networking sites. In addition, pictures can be sent directly via e-mail—and all this for $499.99. The free Samsung Mobile Link app also allows transfer of photos from the camera to a phone or tablet.

Canon’s EOS 6D digital SLR is a higher end Wi-Fi certified camera. It is designed around a 20.2 megapixel full-frame sensor and supports an incredibly wide ISO range. The primary range is from ISO 100–25,600, but that’s expandable two stops on the high end to 102,400, for very low-light photography and one stop on the low end.

With integrated GPS, HDR support, a capture rate of 4.5 frames per second and Full HD video recording, it’s really quite a versatile camera. With its built in Wi-Fi, the 6D can transfer images to preferred websites through the Canon Image Gateway. A smartphone can also be used to control the camera and upload images and videos. It has a suggested retail price of $2,099.

Besides the 6D, Canon has several point-and-shot digital cameras with Wi-Fi on the market, including Elph and PowerShot models.

Nikon offers Wi-Fi as an add-on, instead of incorporating it directly into the camera. Its WU-1a Wireless Mobile adapter is compatible with the D3200 DSLR, while the WU-1b works with the D600. Both adapters make it possible to upload files through smartphones or tablets and to use a smartphone to remotely operate the camera. They have SRPs of $59.95.

Nikon does have a P&S model that directly incorporates Wi-Fi; the Coolpix S800c is the first Nikon camera to feature an Android interface, letting it run any Android app. It’s designed around a 16 megapixel sensor, Full HD 1080p video recording, a 10x Nikkor optical zoom and integrated GPS. It easily connects to any Wi-Fi network or smartphone hotspot and has a list price of $349.95.

Some of the most popular Wi-Fi models are the subcompact mirrorless cameras with interchangeable lenses. Sony’s Alpha NEX-5R digital body is a good example. This compact little camera is designed for serious photography but isn’t much larger than some of the consumer models on the market. It features a 16.1 megapixel APS-C-size sensor and can capture up to 10 fps. That’s the same size sensor that Sony builds into its full-size DSLRs.

The NEX-5R accepts Sony’s extensive selection of E-series lenses and supports HDR photography. It includes fast hybrid autofocus with phase detection and contrast detection and 1,920×1,080 Full HD video. Its Wi-Fi capability lets users transfer photos directly to smartphones and tablets with the PlayMemories Mobile app. The SRP for the NEX-5R body is $599.99. Sony’s NEX-6, with built-in Wi-Fi, also works with the PlayMemories Mobile app and retails for $849.99.

All of the new Olympus PEN Micro Four Thirds system cameras, such as the E-PM2 and E-PL5, as well as the company’s new Stylus XZ-2 camera, are Wi-Fi enabled. Their Wi-Fi capabilities allow consumers to transfer photos wirelessly to smartphones and tablets using the Toshiba FlashAir memory card, which automatically creates an ad hoc Wi-Fi network, and the Olympus Image Share app.

The Olympus Wi-Fi enabled model that provides the strongest combination of high image quality and ease of use is the PEN E-PM2. Designed around a 16 megapixel Live MOS sensor, it is the company’s flagship Micro Four Thirds camera. It includes a TruePic VI image processor, making it possible to capture DSLR quality images with its M.Zuiko Digital interchangeable lenses.

And the PEN E-PM2 is fast. It can capture images at 8 fps and supports shutter speeds up to 1/4,000 of a second. It has an upper ISO of 25,600 and features built-in image stabilization, a supersonic wave filter dust-reduction system, 1080i Full HD video capabilities and a 3.0-inch touch-screen LCD. It lists for $599.99.

Among Panasonic’s Wi-Fi enabled cameras is the Lumix DMC-SZ5. This 14.1 megapixel compact has a Leica lens with a 10x zoom range that extends from a 35mm equivalent of 25–250mm. It can shoot HD video at a 1,280×720 resolution and has a high sensitivity ISO mode that goes up to 6400 for capturing high quality images in low light.

Through its Wi-Fi, it can be connected directly to a smartphone by using it as a wireless router, eliminating the need to search for Wi-Fi hotspots. With the Android Lumix Link app, photographers can shoot remotely, letting them monitor what the cameras lens is seeing, live on the smartphone, at 30 fps. With the app, users have the ability to zoom, set focus position, shoot and playback images directly from the phone screen. In addition, they can tag location information to images by utilizing the GPS log on the smartphone and share it on social network sites. It lists for $199.99.

Wi-Fi digital cameras have been around for six or seven years by now, but they’re just beginning to come into their own. It won’t be all that long before Wi-Fi will become a standard feature on most higher end digital cameras.