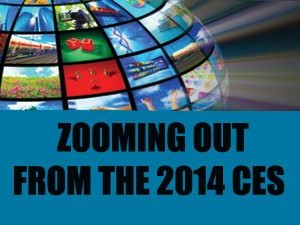 Oh for the good old bad old days! Be careful what you wish for! In the long recession after the dotcom bust, we found ourselves in a succession of CES and PMA shows that seemed under attended, and that resulted in cheaper hotel rooms, a plethora of taxis, cheaper parking right outside the South Hall of the LVCC, spare seats in the press room, and free wheelie bags from Toshiba, etc., etc.

This year we were back to the pre-bust boom. Traffic jams. Expensive rooms. Booked restaurants. Amidst all of this, we are still in a period of declining digicam sales, as smartphones have become the cameras of choice for a large fraction of the world’s population. But the mood in Vegas seemed quite optimistic.

So, fresh back from the 2014 CES and PMA@CES, I’ll just try to fill in between the lines of the major introductions and announcements, which you will read else in this publication.

On Sunday I drove up from Los Angeles through breathtaking scenery (no snow or flight cancellations) and arrived in Vegas in time for the afternoon DIMA sessions. Quite informative. One presentation on photo apps particularly interested me; check out photohome.com, blurb.com/mobile, iFolor.ch, mixbook.com, kromephotos.com, lifepics.com, mediaclip.ca and letsrelive.com to check out this varied selection of photo printing and creation apps that let people do so much more than imagined with their images and video.

Another presentation about enhancing and editing images highlighted Magisto (which now has 19 million users, up from three million a year ago) doing on-the-fly video enhancement), Muvee (with 25 patents for auto-editing and now operating on LG phones, too), Digital Anarchy (aimed at pros and targeting low-light photos from cameraphones), Athentech (hello, Brad! . . . whose auto-image correction software handled 26 million images a day for customers), and ArcSoft (whose Intelligent Image Improvement is in a billion devices worldwide).

Then on Monday evening I attended the invitation-only press-and-media Pepcom event at the Mirage. If I ever needed proof that things are looking up, this was it. The giant room was chock-a-block with exhibitors, and a crowd of journos who ate and drank like there was no tomorrow (which there won’t be if they eat and drink like that at home). There were several camera companies there, including Canon, GoPro (in their own words, “GoPro, maker of the world’s most versatile camera . . . used collectively by more consumers, professional athletes and video production professionals than any other camera in the world”), Nikon, Olympus, Polaroid, Samsung and Sony. Note GoPro’s claim; there were several companies at CES/PMA trying to capture some of GoPro’s market share, but they seem to be trying to stop a large snowball that is rolling downhill.

On Tuesday evening it was off to the Wynn for ShowStoppers, a lavish but smaller press preview. The only camera company I spotted was iON America—on of GoPro’s competitors.

On the show floors themselves, many PMA exhibitors were in a separate location in the LVH (used to be the Hilton’s CC) away from the main LVCC halls. No rational human could ever cover CES and PMA alone unless s/he had Superman’s powers; it is just too big and too spread out. However, I saw dozens of geeks wearing Google Glasses, which (as you know) confer superhuman powers to anyone with a beard (male or female).

Great news: PMA announced that next year, PMA@CES will colocate with the 2015 CES at the LVCC, South Hall.

Another press conference I attended was for the (September) IFA Show in Berlin, where GfK’s global director, Consumer Electronics, Juergen Boyny, gave an excellent overview of the “Digital World” (and gave me the okay to pass some of it on to you). For 2014, they are forecasting that only 3% of global spending on Internet devices will be for digital cameras, versus 35% for smartphones (totaling over 1.2 billion units sold). Smartphones are becoming larger, faster, thinner and better connected; more than a third have 8MP or better sensors, and whereas all are connected, only 13% of DSCs are. Yet, a quick look at the camera companies’ exhibits would give one the impression almost all new digital cameras have some connectivity functions.

But some of the future was well hidden. Feeling nostalgic, I looked in vain for Kodak digicams (JK Imaging), but they were holed up in a hotel somewhere (my invitation must have hit my spam folder), but Sakar did a grand job of highlighting Polaroid cameras, including the clever Socialmatic camera-printer.

Well, so far I’m short by one dimension. I was most impressed by what I saw at the 3D printing area TechZone, where MakerBot (part of Stratasys) was showing its $1,375 MakerBot mini, XYZPrinting had a Da Vinci model for only $499, and 3D Systems showed a whole new range of consumer/prosumer printers. There were 27 exhibitors in that 3D area—by far the buzz of the show. The printing sector is creating demand for 3D scanners, too.

The future is clear, and getting clearer, and more solid.