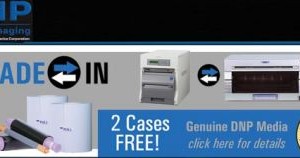 “Since acquiring Sony’s commercial photo printing division in 2011, we have been committed to providing the industry with solutions that increase bottom-line returns,” said Kazuhiro Kawabata, President, DNP Imagingcomm America. “Trade-In & Trade-Up is another example of our commitment to offering our current and potential customers with not only innovative solutions, but greater value at no additional cost.”

To qualify, customers must ship their Sony UPDR200 to DNP’s U.S. headquarters in Concord, North Carolina, along with a completed claim form and proof of purchase for the DS40 from an authorized reseller, by January 2, 2015.

As DNP’s flagship dye-sublimation printer, the DS40 is a compact photo printer that can produce full-bleed 4×6, 5×7 and 6×8 images in glossy or matte finishes. And it can print a 4×6-inch image in less than nine seconds. The printer also produces each print with a special protective coating to ensure resistance to common elements such as dust, water, fingerprints and fading. dnpphoto.com