Minneapolis, MN—AirSelfie announced the launch of a preorder campaign for its Air Pix drone. The next generation of the original AirSelfie, the Air Pix incorporates more features for an enhanced user experience while taking selfies.

The Air Pix drone is touted as a personal selfie photographer that autonomously captures every moment. It also fits in a pocket, so it can always be ready to shoot from an aerial perspective.

“We developed the Air Pix to be our most affordable and intuitive entry-level aerial camera. And the autonomous flying technology we have developed for this new aerial camera is changing the way selfies are taken forever,” said Greg Appelhof, general manager of AirSelfie Inc. “It complements the rest of the AirSelfie line by appealing to a younger, less tech savvy and more novice demographic than the other aerial cameras in the line. We really believe Indiegogo is the perfect place where such an innovative device could have its best launch around the world.”

The drone measures 4.01×3.34×0.51 inches, making the aerial device smaller than an iPhone X. Moreover, its ultralight chassis weighs less than 1.83 ounces, about the same as a golf ball.

Moreover, the Air Pix provides three ways users can pilot the drone. They can take advantage of one-touch autonomous flight; users can launch, fly and take selfies with the push of a button. With Capture Me technology, the drone flies 3–5 feet away and finds the target. It then takes 5, 10 or 15 photos or continuous video before returning back, all by itself. In addition, users can select 360° mode and the Air Pix will fly several feet away and take multiple photos or video while rotating to capture everything around. 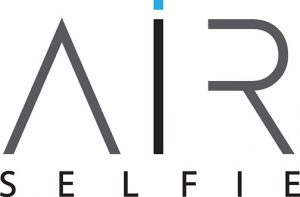 As an alternative, pilots can use the new SYNControl feature and gesture controls. This allows them to pilot and take selfie photos or videos for the very first time without a connection to a smartphone. They can do this via simple gestures and movements.

The new app also provides a suite of image-editing functions. They include cropping, rotating, zoom, color correction as well as the ability to add filters and stickers to personalize images. User also can directly share images and photos to a favorite social media platform.

In fact, the Air Pix enables real-time live streaming to YouTube channels or Facebook pages. However, this features is available only for iOS users at the moment.

To provide a first look at Air Pix, AirSelfie launched an Indiegogo campaign that will last until June, 28, 2019. Consumers can preorder the drone on the crowdfunding platform at a discounted price. When the campaign is completed, the drone will retail for $99.

In addition, the power bank docking station is now available as part of the Air Pix package. It is offered at the discounted price of $19 (instead of the $40 retail price). Both devices will ship worldwide by the end of summer.