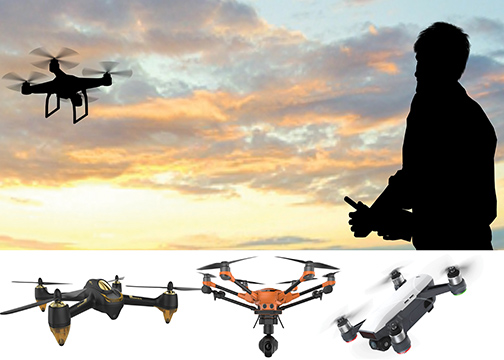 Drones have become both an ever-popular hobbyist activity and imaging tools for photographers and videographers. Government scrutiny has also brought these unmanned aerial vehicles (UAV) into mainstream consciousness, though most consumers have yet to actually fly one. Despite that, dynamic drones are making their way into the imaging ecosystem.

In light of the latest rules from the Federal Aviation Administration (FAA) regulating drone flight throughout the country, manufacturers have rolled with the changes. They have tried to cater to new adopters as well as seasoned pilots. Recreational flight and commercial flight are treated separately, though drones are usually programmed with altitude and distance restrictions already in place.

In addition, content creators are benefitting from better camera optics and smoother flight for longer periods to capture the scenes they want. And advanced features and controls are slowly trickling down to more inexpensive consumer models.

As increasingly more advanced imaging tools, drones are a natural extension of your enthusiast, and even novice, customers’ photographic experience. And for your videography consumer, they are exciting devices that can raise their level of creativity.

A Selection of Dynamic Drones

Unlike other drones from DJI, the Spark is a pint-size quadcopter designed to shoot in closer quarters and is not designed to avoid wider vistas. Equipped with a 12 megapixel image sensor, it is limited to shooting video in Full HD 1080p resolution at 30 frames per second. The camera operates on a two-axis mechanical gimbal, meaning it can stabilize shooting on the pitch and roll, but not the yaw.

Despite that, it’s very lightweight, at about 11 ounces, and includes a built-in obstacle avoidance system to reduce potential crashing incidents. Flight modes have also been expanded to make it easier to capture footage by following a subject or flying a set path without having advanced piloting experience. And in new sphere mode, users can produce a panoramic photo with a fisheye effect.

The iOS/Android app is the default way to control the Spark, as no physical controller comes in the box. However, DJI claims it is the first consumer drone users can control by hand gestures alone, sending it up and away, taking a selfie, shooting a video and calling it back. The idea is to make the Spark capable of shooting with cinematic flair, like circling around or up and away while locked onto a subject, for example.

DJI also claims up to 16 minutes of flight time per charge. A second battery is included to double that for an outing. It is partly marketed as a selfie drone, made possible by what the company considers to be superior stabilization to keep images clear and sharp. $499.99. dji.com

Yuneec offers this drone under its commercial drone banner because it’s aimed more at cinema and industrial use cases. Deploying the same six-rotor design with retractable landing gear used in previous consumer-focused models, the H520 is more robust. Meant for deployment by law enforcement, security, construction and inspection personnel, its other primary use is for the film and broadcasting markets.

The camera is interchangeable and hot swappable, not requiring the drone be powered down to change lenses on the fly. Three particular cameras are compatible with the H520. The E90 is a 20MP wide-angle that shoots at a higher frame rate for steady long shots. The CGO-ET is a dual lens that shoots two video streams simultaneously and is extra sensitive to low light, with Yuneec claiming about 20x better visibility in those conditions. The E50 is a medium focal length 40mm-equivalent lens using a 1/2.3-inch, 12.4MP CMOS sensor ideally suited to capturing higher quality footage. It can record 4K video at 30 fps and 1080p at 120 fps.

Memory cards are also swappable, ensuring footage is captured without having to start over with a new one to get the right shot. Piloting on the ST16S controller streams real-time footage to the 7-inch screen at 720p, though an HDMI output allows for projecting live to a larger display. Transmitting distance is limited to one mile. The DataPilot software enables flight planning and tracking to choreograph shots in advance. Starts at $1,999.99. yuneec.com

This mini FPV (first-person view) carbon fiber drone is less an aerial photography drone and more a racing quadcopter. The modularity inherent in the QAV250 makes it nimble enough to be almost anything a pilot wants it to be. Lumenier sells it in a ready-to-fly iteration that should be enough for novice users, with suggested add-ons made to put on the finishing touches from the start.

Being modular, the QAV250 can be built into a number of different configurations. For example, an FPV camera or non-FPV 1080p camera can be installed on the hull. Rather than go with a 2.4GHz controller, upgrading to a less cluttered 5.8GHz one is another option. Lumenier makes the components and parts. However, third-party pieces are also customizable, like a GoPro gimbal or video transmitter from another vendor.

The company claims vibration-free video capture, which is hard to guarantee under most conditions but is nonetheless highlighted. Geared toward pilots who prefer to tinker and fashion their drones with their own hands, the QAV250 can be complicated to deal with for inexperienced flyers.

There are larger Lumenier models, the QAV400, QAV500 V2 and QAV540G, under the same premise of modularity and customization. Ready-to-fly kit, $399.99. lumenier.com

Out of all DJI’s drones, the Inspire series is especially geared toward the line straddling consumer and commercial flight. The Inspire 2 bears many of the same physical traits of its predecessor. However, it features an upgradeable Zenmuse camera that is compatible with the X4S and X5S, with lenses ranging between 18mm and 90mm. It acts separately from a front-facing FPV camera that allows the pilot to see what the drone sees while also viewing footage from the Zenmuse.

That footage can come in 4K resolution at 60 fps or even 5.2K at 30 fps. Spotlight Pro is a tracking mode that adapts to stay locked onto the subject. For example, the drone will rotate to maintain a continuous track whenever the gimbal hits its rotation limit. DJI integrated it into the Inspire 2’s intelligent flight modes, like Point of Interest and QuickSpin, among others. Also, built-in two-way obstacle avoidance means the drone can sense an object in its path up to 100 feet away. This also works when it is en route back to its takeoff point with its smart return to home function.

DJI’s LightBridge technology for the video downlink is enhanced to a maximum distance of 4.3 miles. Powering all this is a dual battery setup designed to double flight time to a rated 27 minutes. A charging dock can fit four batteries at once, ensuring prolonged flight in one sitting. Starts at $2,999.99. dji.com

For those looking to gain a foothold in drone piloting experience without breaking the bank, this is one model offering a fairly decent feature set. A relatively compact drone, it weighs less than a pound. Moreover, it sits in a middle ground in size and comes in both Standard and High editions. The key difference between the two pertains to the controller and available features.

Though older than more recent Hubsan releases, the H501S X4 is arguably the company’s most popular. It captures Full HD 1080p video at 30 fps. However, image quality is reflective of the price point and won’t match more expensive models.

Its follow me function will stay locked onto a subject. In addition, Failsafe mode is an equal standout. This mode will force the drone back home to its takeoff point when out of range. Headless mode removes some of the proverbial training wheels for those looking to take greater control over flight performance.

The included controller uses a 5.8GHz wireless signal to communicate with the H501S X4. In addition, it displays a live view of its camera on the 4.3-inch screen. Battery life is rated at 20 minutes, but as with any drone, that largely depends on flying conditions. High edition, $289. hubsan.com