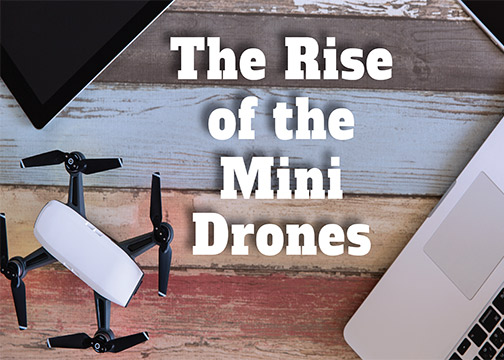 Smaller drones or mini drones have some distinct advantages that their larger brethren don’t have—and it all comes down to size. Unlike larger drones designed to fly and capture footage from far and wide, small and mini drones are for closer proximities.

Operating with a shorter radius means it’s less likely one would flout the Federal Aviation Administration (FAA) rules regulating how and where people can pilot them nationwide.

Moreover, better optics and flight stability are trickling down to these smaller models, too. There are a growing number of mini drones on the market, some of which don’t even have cameras attached. Others are affordable, making them ideal for pilot training rather than capturing high-quality video. Despite that, there is a small group that can produce much better results, including the six we focus on here.

For a different twist on mini drones, AEE Technology’s Selfly is actually a smartphone case with an embedded drone. The mini drone provides smartphone users with the ability to capture selfie pictures from heights and distances. With a touch of a button, AEE Selfly springs to life and flies a mission to capture selfies from high above or from tight spaces. It gives the user options and angles beyond the arm’s length of a selfie stick. As a case to a smartphone, AEE Selfly can always be with consumers to capture selfies, so it scores points for convenience.

Using high-end stabilization technology, the drone case snaps onto most standard size 4–6-inch smartphones. Its foldable drone wings enable the device to fly itself at the user’s command, to deliver distant, tight angle or high altitude photo or video selfies. As it hovers in the air, the Selfly waits for commands via a free smartphone app.

No 4K video here, but the Selfly does record Full HD 1080p video, and its 13MP camera also supports capturing wide panoramic photos. Moreover, its fly by picture mode is designed to make for easy flying via a smartphone. The mini drone is also compatible with both Apple iOS and Android smart devices. While it offers the convenience of always being there, the drone only has a flight time of four minutes, with an approximate recharge time of 30 minutes. $99.99.

When launching the Mavic 2, DJI decided to diverge by offering two versions of its popular drone. Both are identical in build quality, dimensions and weight. The only difference is the camera.

The Pro model boasts a Hasselblad camera with a 1-inch CMOS sensor. The Zoom has a smaller 1/2.3-inch sensor and 24–48mm optical zoom lens. There are some other key distinctions for imaging that apply, including better low-light shooting and an adjustable aperture on the Pro version. The Zoom is limited to the standard 16 million colors; the Pro is theoretically capable of well over a billion.

But the Pro can’t zoom in on a subject, and that’s where they differ significantly out in the field. With a 2x optical zoom, the Mavic 2 Zoom can hone in on a subject for more dramatic takes. In addition, pilots can choose to go further with an additional 2x digital zoom at 1080p. DJI says the telephoto lens enhances the parallax effect for a classic cinematic look. The advantage is in shooting subjects that may be too risky to capture by flying closer, like architecture and wildlife.

In addition, a 3-axis gimbal works to shoot at a variety of angles, maintaining smooth panning throughout. Focus speed is supposed to be 40% faster, and the system uses both phase- and contrast-detection AF for better accuracy. Added to the Zoom drone is Dolly Zoom, which adjusts focus during flight without losing focus on the subject, resulting in a warping effect. Also, Super Resolution mode merges nine photos together to create a 48MP image.

Pilots also can save flight paths in the Task Library to shoot the same scene at different times of the day or night. Despite the reduced low-light performance relative to the Pro, the Mavic 2 Zoom provides HyperLight, which is designed to enhance nighttime shooting. Just as important, obstacle avoidance now covers all sides, including top and bottom. DJI also claims these drones have slightly longer battery life and faster speed, overall, but not to a large degree. $1,249.

The Spark is a quadcopter small enough to take just about anywhere. DJI designed it for shooting in closer quarters, including aerial selfies. However, it is robust enough to capture wider areas. There’s no 4K video recording here, but the 12MP image sensor has been acclaimed for shooting good 1080p video, even if it is limited to 30 frames per second. The mechanical gimbal is a 2-axis unit, so it will stabilize on the pitch and roll, but not the yaw.

Weighing in at only 10.6 ounces, the Spark is so lightweight it’s easy to travel with, even with carry-on luggage. Despite including the obstacle avoidance system typically seen in larger DJI drones, piloting is defaulted to the iOS or Android app. The controller, which makes for more precise control, is sold separately. Gesture-based controls are another option, particularly for selfies. Following the subject forms the basis for all the flight modes the drone supports, though there is no way to save a custom flight path, like you could with the Mavic 2.

Firmware updates since launch have improved performance, especially with gesture control, but the other fundamentals are the same. DJI’s claim of 16 minutes of flight time is essentially hovering under no wind. Actual results would likely skew downward. There is a second battery in the box to help the cause.

The Spark is a cheaper alternative to the likes of the Mavic, except for the focus on shooting people in smaller areas. Shooting in wider areas is more limited by both battery life and flight range, especially when using the app to control it. $399.99.

After a short absence in bringing something new to the drone market, Parrot chose to get a little serious with the Anafi. Unlike previous drones, like the Bebop and Disco, this model is highly portable with hinged arms that fold inward to reduce its overall footprint. It comes with a carrying case that makes the whole package about the size of a water bottle. The drone itself weighs just over 11 ounces.

Rather than a fixed camera, the Anafi has a 3-axis gimbal capable of shooting 4K resolution with HDR video. It also captures 21MP HDR photos. The tilt pans 180º up or down, providing pilots with some good flexibility in capturing scenes from different angles without having to reorient the drone itself. Equipped with a 1/2.4-inch CMOS sensor and wide-angle f/2.4 lens, the drone can shoot in 4K and 1080p at 30 fps or 24 fps. Only 1080p resolution can kick it up to 60 fps.

While Parrot didn’t introduce any new flight modes, it did adopt the standard ones for the drone market, including Auto-Follow, Orbit, Hyperlapse, Dolly Zoom and Waypoints. Unfortunately, there’s no obstacle avoidance to protect the Anafi from inadvertent collisions, forcing pilots to be more precise and cautious during flight.

Parrot says the battery can last up to 25 minutes in flight time, though the number is highly situational, as it is with any drone. The charger does use USB-C, keeping in line with the tech industry’s slow move to the new standard.

While the Anafi does come with a controller, it still needs the FreeFlight 6 iOS and Android app to visualize what the drone’s camera is looking at and make some adjustments on the fly. $599.99.

This is Yuneec’s second attempt at a smaller drone, and the company equipped the Mantis Q with a number of features. The foldable design lowers the footprint to make it easier to transport in a bag, though it is a bit heavier at one pound.

The 13MP, 1/3-inch CMOS sensor can shoot in 4K and 1080p, but the conditions need to be optimal. Low-light and night footage will be more difficult with a sensor this small. Digital image stabilization only works when shooting 1080p video, and the 2-axis gimbal can tilt upward by 20º or downward by 90º.

The usual cinematic modes apply, including Point of Interest, Orbit and Journey. Others are meant to be dynamic, like the vision-based tracking. Here smiling or waving at the drone will snap a still photo up to 13 feet away. This also extends to voice, where the Mantis Q can power up, take a photo or start recording video through verbal commands. Specs also state a top speed of 44.7 mph.

Yuneec rates battery life at 33 minutes, but actual conditions will likely push that down a few minutes. The controller comes in the box and requires the iOS or Android app for a live view. $499.99.

The Breeze 4K was Yuneec’s first take on making a mini drone with an emphasis on selfies and close-quarters video. Weighing under a pound and with a small fold-in profile, this drone is far more portable than the average model coming from the company.

With a 13MP sensor, the 4K-capable camera can manage video at 30 fps. However, it may be more effective shooting 1080p resolution because of the faster 60 fps frame rate and digital imaging stabilization. That feature grows in importance because the Breeze 4K has no gimbal. This means video can be choppy when flying in windy conditions.

The drone doesn’t come with a controller of its own; it relies instead on the iOS and Android app to act as the piloting interface. Virtual joysticks have a hard time emulating physical ones, which is why Yuneec loaded up automated flight modes to pick up the slack. Standard ones, like Follow Me and Orbit, are there, as well as Selfie, Journey and Manual Pilot. Of those, Journey focuses on a person and zooms out by flying backward for cinematic flair.

Yuneec includes two batteries in the box to make up for the short flight time. Despite being rated at 12 minutes, actual flight time is lower, closer to 10 minutes. $399.99.