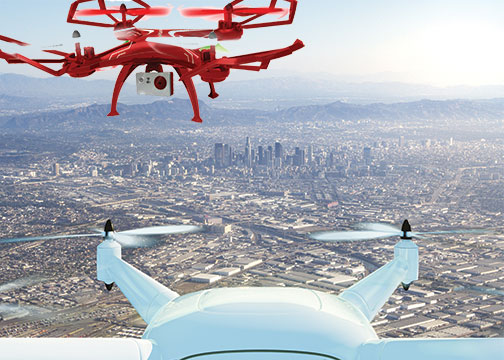 It’s hard to get the kind of vantage point and footage drones can deliver any other way, and it seems more photographers and videographers have taken notice. So selling drones and accessories to increase their image-taking prowess is a natural for photo retailers.

The Federal Aviation Administration (FAA) now regulates the use of drones for commercial purposes, though consumers would have to register one even if it’s for recreational purposes. It’s easy to understand why, given that the FAA projects a surge in drone sales from 2.5 million in 2016 to 7 million by 2020.

Assuming those projections come to pass, it would mean the market could almost triple in a very short time. It could also mean a wider consumer subset may spur growth. The market could branch out from enthusiasts and hobbyists to general consumers venturing into aerial imaging.

For manufacturers, distributors and retailers, carving out a slice of that burgeoning pie may require more cooperation and investment to better educate photographers and videographers on the merits for their craft.

“Until you get [a drone] in hand, it’s hard to understand and appreciate the level of sophistication that is very cooperative with ease of use,” says Daniel Campo, director of Sales at DJI in North America. “The challenge is that most of the retailers hiring for their digital imaging departments have people who have grown up interested and working in those industries before.”

With drones being a “new frontier,” Campo has helped organize campaigns toward training initiatives for dealers. These include new pilot experience workshops where DJI trainers team up with retailers to teach customers the basics. These hands-on sessions with the local community are designed to cover the features, starting with takeoff, landing and capturing images. But they could be expanded further to intermediate and advanced levels.

For that reason, Campo promotes hands-on access as an important element to bridging the gap. The salesperson’s own experiences flying a particular drone could prove invaluable, particularly in post-sale scenarios. That’s why staying apprised of the latest aerial imaging technologies and regulations only helps to build more trust, he says.

Working with the FAA

Michael Kahn, CEO of Yuneec USA, shares a similar outlook. He highlights the role manufacturers can play in supporting retail expertise. Part of navigating that may require some reassurance based on current trends.

The FAA reported 1,274 sightings of drones flying too close to other aircraft in an eight-month period in 2016. That represents a 46% increase over the year before. The more drones are in the news for the wrong reasons, the greater the onus on manufacturers and retailers to be speaking the same language. This is one reason Yuneec has partnered with the FAA to support the B4UFLY program, says Kahn.

“It can look intimidating at first glance and scare off a lot of would-be enthusiasts who are great customers. Don’t be shy to ask for help from the manufacturers to train sales staff and assist customers,” explains Kahn. “Working together, this brave, new frontier can represent a huge boost to expanding video and camera users.”

FAA certification Part 107 is an online training course for “Small Unmanned Aircraft Systems.” The course is required for anyone looking to fly and shoot images with a drone for work or business purposes. Approval from the Transportation Security Administration (TSA) is also a prerequisite. Flying for fun, however, only requires registering the drone and labeling it with the assigned registration number. With either designation, flight rules are always to be obeyed.

“Safety and FAA compliance in registration can be frightening for retailers and end users alike,” says Kahn. “Although drones are absolutely fun to fly, retailers are engaging more with drone companies and realizing these are not just ‘hobby class’ products.”

DJI and Yuneec have emerged as popular drone brands by competing on features. DJI’s Phantom 4 Pro and Advanced each have one-inch image sensors that are more sensitive to light. This results in improved dynamic range and depth of field. Yuneec’s Typhoon H has six rotors and retractable landing gear, allowing the gimbal to rotate a full 360º unobstructed.

Other technologies, like Intel RealSense for autonomous flying, and follow-me features, open up potential imaging opportunities. Some drones are also programmed not to fly in restricted zones. Or they may be limited to regulatory limits for altitude and distance by default. To what degree customers are aware of all those features is hard to quantify.

“We had the ability to mount mirrorless and DSLR cameras to larger platform drones with special gimbals that would house cameras like the Canon 5D Mark II and Sony 7. Whereas now, our Inspire series and X5 cameras have comparable sensors,” says Campo. “In our Inspire 2, we added support for 5K RAW and Apple ProRes, with licenses to allow a consumer to purchase the drone with that registered and built-in, or to register later and add it on.”

This only applies to DJI’s ZenMuse X5S camera, not the X4S—a distinction that would be very important to note for any professional or serious amateur looking to invest in a drone. That the X5S also houses a 20.8 megapixel Micro Four Thirds sensor and supports up to 10 different lenses also that stands out.

Highlighting the imaging prowess of a drone can be easier to visualize by seeing results. Upselling a drone’s imaging production with accessories brings it all closer to how traditional cameras have always been sold, with accessories for performance and output.

PolarPro doesn’t make drones, but its lens filters and other accessories service that market. The company’s standard filter set for each drone model is for fostering familiarity with how they work and what they can do. Its Cinema series filters are “top of the line quality filters” aimed at more professional use cases.

“A drone has become a product very much like a GoPro. You make that initial investment for a great piece of equipment, and then you have an opportunity to customize specifically to your needs or the filming experience you’re looking for,” explains Austen Butler, vice president and cofounder of PolarPro. “When it comes to filming in different lighting situations, you’re limited to a lot of the settings you have on the camera. So the filters are definitely the go-to.”

Beyond that, the company’s other drone-focused products are about protection, like backpacks, hard cases, gimbal locks and gimbal guards. Various manufacturers have entered the market with their own cases and accessories. These include Nanuk, Go Professional, Hoodman, Think Tank Photo and Lowepro, among others. Lens filters aren’t as common, but they can be easy to show through comparison videos.

“With our roots kind of being with the GoPro and action cam filters and accessories, and moving into the drone space, we’re going from a targeted customer that has very little knowledge or education around film and photo to people who have some digital imaging experience,” says Butler. “There’s more and more information on forums and web platforms. So individuals are doing their own research and going to retailers with a better idea of what they need.”

Relying on consumer knowledge alone isn’t enough, he adds. Filters are a unique example of ways retailers can illustrate how aerial photography gets an imaging boost. Capturing great exposures and smoothing out rolling shutters is challenging in a moving object like a drone. Butler believes explaining how and why to an unaware customer is one example of building confidence.

“The biggest shift we’ve seen from the beginning is that more people have drones, and more want to enhance the images they’re capturing,” he says. “We don’t see that slowing down, and retailers have a great opportunity to play a role in that evolution.”