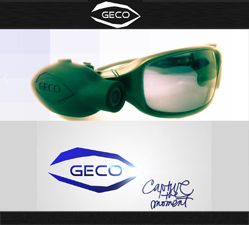 Las Vegas, NV—Three college students from Johannesburg, South Africa, created the “world’s first glasses-mounted action camera’’—the Geco Mark II. The Geco is based on the idea that capturing memories should be simple and convenient, rather than having to take out a camera, turn it on, wait for the recording light to start blinking, and ensure the lens is aimed correctly.

The Geco mounts onto the side of any glasses or sunglasses, making it hands-free, and simultaneously powers up and starts recording with the click of a single button. It sits at eye-level, providing a first-person perspective and allowing the viewer to see through the recorder’s eyes.

“The Geco was intended to create a new genre of action camera,” said COO and design lead Mishka Naidoo, “one that is appealing to the average person and not just the adrenaline junkies and extreme sportsmen out there.” She added that its design was thought through for this exact purpose: to be able to use it in everyday life. “It was designed ergonomically; its curvature intended to make it flow with the contours of the face and make it seem as natural as possible.”

The Geco follows the current trend of wearable technology. It’s small and user friendly. “We wanted to make the camera as affordable as possible without sacrificing the quality of the lens, and the build of the product,” said CTO and engineering lead Dhiren Tahilram. “We have spent countless hours and used many a prototype to develop the final product in a way that appeals to the final consumer aesthetically as well as has all the functionality desired by the original concept.”

Weighing less than an ounce, the camera has a wide-angle lens and shoots video in Full HD resolution. It comes standard with a waterproof case that is capable of going down to nearly 100 feet, a tripod mount and a class 10 8GB microSD card.

“Geco aims to appeal to everyone from the father traveling with his family, to the vlogger on Youtube, the chef on the Food Network, the surfer venturing around Hawaii, and it aims to do so through compactness and simplicity,” added Prinesh Naidoo, CEO.

Geco, which retails for $250, will be exhibiting at 2015 International CES in Las Vegas at Eureka Park. gecocam.com