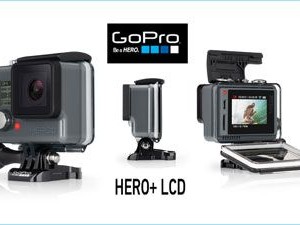 Like the entry-level Hero, the Hero+ LCD is built directly into its waterproof housing, making it waterproof to 131 feet. The POV action cam also includes “HiLight” tagging, which enables users to mark key moments while recording and during playback so they can easily find them later. Then, using the new video-trimming function, they can create short clips in-camera for sharing without a computer.

Built-in Wi-Fi and Bluetooth connect the Hero+ LCD to a GoPro app-enabled smartphone or tablet for camera control and shot preview when the camera is mounted or out of reach. The GoPro app also facilitates content sharing to Instagram, Facebook, Twitter and other social sites.

“Hero+ LCD illustrates that even as we push the limits of life capture with bleeding-edge devices like the Hero4 Black, we’re also focused on delivering accessible, high-quality capture solutions to anyone wanting to GoPro,” said Nick Woodman, founder and CEO of GoPro.

Other features include: the capability to power on and record automatically with the press of a single button using the QuikCapture setting; two hours of recording time per battery charge; an integrated housing design for ease of use; and support for microSD cards (at least Class 10 or UHS-I) up to 64 gigabytes.