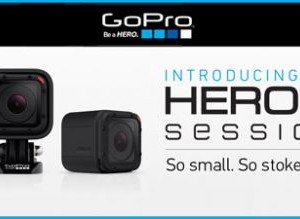 San Mateo, CA—GoPro announced the Hero4 Session, the smallest, lightest GoPro yet. The Hero4 Session is 50% smaller and 40% lighter than GoPro’s best-selling Hero4 Black and Silver cameras yet provides the same image quality and performance.

The new POV action cam features simple one-button control to make capturing immersive photos and video quicker than before, as well as a durable waterproof design that lets it operate at depths of 33 feet and eliminates the need for a separate housing.

“With Hero4 Session, we challenged ourselves to produce the smallest, lightest, most convenient GoPro possible,” said Nicholas Woodman, GoPro founder and CEO. “Hero4 Session combines the best of our engineering and user-experience know-how to deliver our most convenient life-capture solution, yet. I’m so excited about the launch of Hero4 Session because now I can finally use mine in public!”

The cam captures GoPro-quality 1080p 60, 720p 100, and 1440p 30 video along with 8 megapixel photos in single, burst and time-lapse modes. It has many of the same functions found in GoPro’s Hero4 Black and Silver cameras, including SuperView, Protune and auto low-light recording modes. An expanded set of controls and settings can be accessed when using the GoPro app or smart remote.

A dual microphone system dynamically switches sound recording between microphones to reduce wind noise during activities. Audio performance during water-based activities was improved thanks to the Hero4 Session’s waterproof design, which  can often muffle sounds.

“At GoPro, sound quality is as important as image quality, and we’re very excited about the stunning audio advancements we’ve made with Hero4 Session during water-based and windy activities,” added Woodman. “It’s incredible what this little GoPro can capture.”

Other features include: built-in Wi-Fi and Bluetooth for connectivity to the GoPro app and smart remote; auto image rotation, which corrects image orientation during recording; and an included new ball joint buckle mount with a rotating axis that allows for a range of perspectives from a single mounting position and enables users to quickly change the angle of capture without un-mounting the camera.

Also created specifically for the Hero4 Session, GoPro introduced the optional Floaty ($19.99), an easy-to-spot flotation accessory that wraps around the Hero4 Session to keep it afloat. It’s specially built to protect the camera while allowing access to the shutter button.

More GoPro Accessories
In conjunction with the launch of the Hero4 Session, GoPro introduced a collection of accessories that are compatible with all Hero cameras.

The Strap. This accessory is designed to deliver nearly limitless mounting possibilities without limiting the shooters range of motion, whether wrapped on a hand, wrist or leg. SRP: $59.99.

The Jam. For musicians, this adjustable accessory mounts a GoPro to just about anything on stage, whether it’s a guitar headstock, drum hoop, keyboard, brass instrument or a mic stand. $69.99.

Casey. This is GoPro’s first travel and storage solution to keep gear protected. It has a water-resistant, semirigid shell to protect against light rain and snow, while a padded interior with removable dividers protects camera and accessories. The Casey will fit inside a backpack but is large enough to carry a range of gear and accessories. $49.99.

WindSlayer. For GoPro Hero4, Hero3+ and Hero3 users, this foam windscreen reduces wind noise to enhance audio capture during high-speed activities or in windy environments. It’s designed for use with the Frame or handheld shooting with just the camera. $19.99. gopro.com