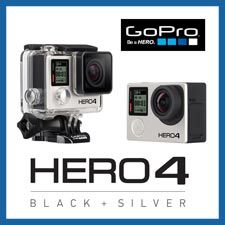 The Hero4 Black delivers twice the performance of its predecessor, capturing cinema-quality 4K video at 30 fps, 2.7K video at 50 fps and 1080p video at 120 fps. It’s also engineered to virtually eliminate rolling shutter in most scenarios while allowing for slow motion effects. The Black also has an entirely redesigned audio system for high fidelity sound with 2x the dynamic range of previous models. Additional enhancements include improved image quality, low-light performance and an improved user interface for easier discoverability and access to key features and controls.

“For the past twelve years, our passion has been to make it easy for people to self-capture jaw-dropping, professional-quality footage of themselves engaged in their favorite activities,” said Nicholas Woodman, GoPro founder and CEO. “That passion led us to embark on our most ambitious design and engineering effort ever, and the result is nothing short of the ultimate GoPro—the Hero4 Black. We can’t wait to see what the world captures with it.”

Other Hero4 Black features include: the ability to extract 8.3 megapixel stills from video in real time; 12MP photos at burst speeds of 30 photos per second; an updated user interface with improved discoverability and access to key camera controls; and 50% faster Wi-Fi combined with Bluetooth to deliver enhanced GoPro app performance and improved power management.

“A common pain-point is deciding between capturing video or photos of an experience,” added Woodman. “Each frame of4K 30 video is similar to an 8.3 megapixel photo. The result is that users can simultaneously capture eye-popping 4K 30 video and impressive 8.3 megapixel photo-like video stills at 30 frames per second when using Hero4 Black. It’s one of the many wild capabilities of this impressive new device.”

Added shared features of the Hero4 Black and Silver include: protune mode for those who want manual control of their GoPro to maximize versatility, now providing color, sharpness, ISO limit and exposure controls for photo and video capture; night photo and night lapse, which allow users to capture ultra-low-light scenes with customizable exposure settings of up to 30 seconds; and HiLight tagging, a feature that marks key moments with the push of a button while recording, to make it easy to find, playback and share favorite clips in GoPro Studio or with the GoPro app. In addition, QuikCapture powers on the GoPro and records with the press of a single button. When enabled, a single press starts video capture, while a press and hold engages time-lapse photo capture.

Introducing the Entry-Level GoPro Hero
GoPro also debuted Hero, an entry-level GoPro designed with simplicity in mind and built into a waterproof housing. Hero captures Full HD 1080p video at 30 fps and 720p video at 60 fps. Hero has an SRP of $129.

New Mounts and Accessories
Now available are the following new GoPro mounts and accessories:
•    Smart Remote: This wearable and waterproof remote controls a GoPro from 600 feet away.
•    The Handler: A compact, floating handgrip geared for handheld shooting.
•    BacPac Accessories: An improved battery BacPac provides almost twice the battery power over the camera’s internal battery alone, and a new LCD BacPac provides improved touch and swipe performance with the Hero4 Black.

GoPro App and GoPro Studio
GoPro made several upgrades to its GoPro Studio desktop editing software and mobile GoPro app. GoPro Studio allows users to import GoPro footage from the camera to a computer for editing. It features GoPro edit templates—template versions of some of GoPro’s most popular videos. Users can just replace the original GoPro video clips in the templates with their own favorite clips.

The GoPro app for mobile gives users access to the GoPro Channel and all of its content, as well as control of the Hero4 Black and Silver for quick changes to any mode or setting. Expanded GoPro app support for Hero4 includes support for HiLight tagging while recording and searching for tags during playback. As always, the app allows for shot preview, playback and sharing of favorite photos and videos via e-mail, text, Facebook and Twitter.