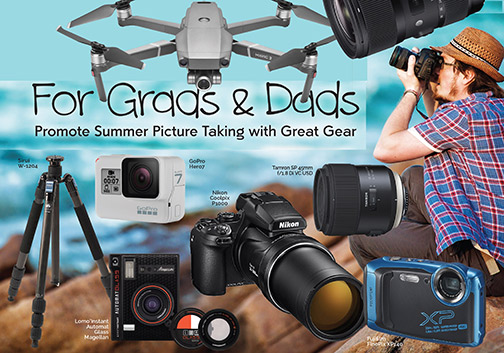 Picture taking has never been more woven into the fabric of our culture than at any time. From casual snapshooters and outdoor enthusiasts to Instagrammers and vloggers, today’s imaging ecosystem encompasses a wide variety of visual storytellers. To say imaging equipment would make a perfect gift for your customers’ dads and grads is understating it. This is the perfect time of year to promote real cameras and imaging accessories, as well as other imaging-related products, as the ideal presents. Our editors have come up with a selection of terrific gadgets and gear to fill any imaging gifts wish list.

GoPro still leads the pack in the action camera category, and the flagship Hero7 is their most versatile camera yet. For a limited time, your customers can delight any dad or grad with the first special colorway released by GoPro—the Hero7 White. The company changed the game for in-camera video stabilization with its Hero7’s standout feature, HyperSmooth, which takes the shake out of recorded video. Moreover, the Hero7 offers additional video and photo modes: TimeWarp transforms longer activities into sped-up, magic-carpet-ride adventures; and SuperPhoto analyzes a scene to automatically capture the best photos.

Best of all, the Hero7 is the first GoPro to live stream to Facebook as well as YouTube. The waterproof camera also features 10MP still capture, Full HD video recording, touch-screen operation, voice control and the ability to shoot vertically. $199.99.

At the top of the ultra-zoom category, this 2019 Rudy Award winner uses Nikon’s Dynamic Fine Zoom technology to extend its reach to 250x, or a staggering 6000mm. To handle extreme distances, it provides 5 stops of shake compensation. It also features: a function button; command dial and mode dial; a focus mode selector; a control ring that allows adjustment of settings; a 2.3M-dot OLED EVF; and a vari-angle, 3.2-inch, 921K-dot LCD to capture cool angles. Plus, there are designated scene modes like moon, to literally shoot the moon. $999.95.

For grads and dads who have a full camera bag, think outside the box with a high-flying drone! Sporting DJI’s popular folding design, the Mavic 2 Zoom features 3-axis gimbal-stabilized cameras and advanced intelligent features like Hyperlapse and ActiveTrack to help new pilots take smooth video. It also has a more stable video transmission system and is powered by a 1/2.3-inch 12MP CMOS sensor. But what sets this drone apart is the fact that it’s DJI’s first foldable consumer drone that combines 2x optical zoom (24–48mm) with 2x digital zoom to simulate a 96mm telephoto lens.

A hybrid AF system uses phase and contrast detection for higher accuracy, with 40% faster speeds. The drone captures 4K UHD video at 100-megabits/sec and 12MP photos. Plus, its super resolution feature uses optical zoom to automatically stitch nine photos together to create a 48MP image! Another bonus is Dolly Zoom QuickShot mode, which creates “an otherworldly warped perspective,” keeping the subject the same size while the full background is revealed. $1,249.

For adventurous dads and grads, have your customers check out the latest in Fujifilm’s wildly popular rugged XP point-and-shoot cameras. The XP140 is now waterproof to 82 feet, shockproof enough to survive a 5.9-foot fall, freezeproof to 14°F and dustproof. Portable but full featured, it uses Fujifilm’s color reproduction technology and a 16.4MP BSI CMOS sensor. Its Fujinon 5x optical zoom, 28–140mm-equivalent lens reaches 10x with Fujifilm’s Intelligent Digital Zoom technology. And, the XP140 has an optical image stabilization mechanism.

Automatic functions for photographers of all skill levels include an easy-to-use interface and evolved scene recognition auto mode. Plus an eye detection function automatically focuses on subjects’ eyes. For creativity, it boasts 17 filters, including the new rich & fine and monochrome effects. Other features include: 15-fps shooting; 4K video recording; and Bluetooth connectivity for automatic, instant transfer to smartphones. Images can even be transferred to an SP printer. It comes in yellow or sky blue. $229.95.

We had to include an analog camera. We love the handsome Lomo’Instant Automat Glass, which will appeal to both nostalgic dads and digital native grads! And it’s a win-win, because you can sell tons of Fujifilm Instax mini film. Its 21mm-equivalent wide-angle glass lens and fast f/4.5 aperture maximize the low-light potential of Instax mini film, even without using the flash.

The Magellan owes its name to pioneering voyages and stargazing observatories that paved the way for new discoveries. Its textured black faux-leather body sports a geometric design and fluorescent orange details. And with intelligent autoexposure and creative features, this rendition adds a sharp, multicoated glass lens. It has a focusing distance of just under 12 inches, and its zone-focusing system works with Lomography’s click-and-stop feel to make focusing easier. Users can switch to 0.3m for selfies; turn to 0.6m to fit a friend in; or set the focus to infinity and aim for the stars. Other niceties include: a Splitzer close-up (4 inches) attachment that also creates multiple exposures; a remote control lens cap that doubles as a remote shutter release; light painting; and color gel flash filters. $189.

This impressive Tamron high-speed prime for full-frame DSLRs provides 67.5mm-equivalent coverage on DX-format Nikons and 72mm-equivalent coverage on APS-C-format Canons. One LD element and two molded glass aspheric elements correct aberrations. And the lens provides very even illumination and excellent sharpness across the field at all apertures. Its floating element system achieves a minimum focus distance of 11.4 inches, while Tamron’s BBAR and eBand coatings maximize light transmission and minimize flare.

For easy cleanup, a fluorine coating on the front element repels grime. Other features include: an ultrasilent drive (USD) motor for fast, quiet AF; built-in VC image stabilization; a rounded 9-blade diaphragm to enhance its natural bokeh effect; and moisture-resistant construction. SILKYPIX Developer Studio software is a plus. $599.

A perfect stabilization solution for avid outdoor shooters, this innovative Sirui tripod is dustproof and waterproof to IPX Level 7. And it’s a gift to last the ages; the tripod uses a proprietary ring system that prevents water from seeping into the legs and causing damage. Its 10-layer carbon fiber legs have ergonomic, three-position leg-angle locks that lock into position automatically. And it converts to a waterproof monopod. Moreover, its legs fold back 180º for a compact folded length of only 19.3 inches and easy transport. 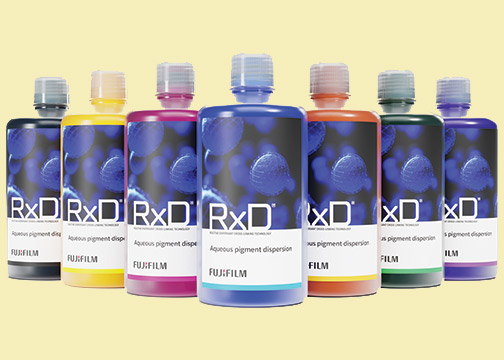