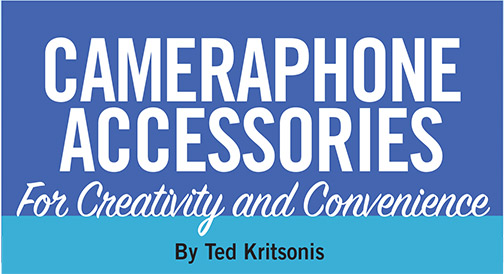 Smartphones made some collective progress in their imaging prowess during 2015, thanks largely to tangible improvements from both flagship models and midrange handsets. The increasing popularity of mobile photography as a form of expression on social media has only driven the arms race further.

Helping the cause is a thriving accessory aftermarket that assists phoneographers of all stripes in shooting more. It can be a lens attachment, special tripod or a small rig for a budding videographer. Here are some of the standouts we like.

With the iPhone 6s and 6s Plus now out on the market, Olloclip continues its support with a lens attachment that slides on from the top. The Active lens forgoes the 4-in-1 form of the previous model, sticking to two lenses instead. The ultra-wide lens sits somewhere between a standard wide-angle and fisheye lens, putting it closer to an action camera effect without warping the corners too much.

The telephoto lens offers a 2x zoom, pulling the subject in closer to the iPhone, which doesn’t have much of a zoom to begin with. There is no fisheye or “bending” on the fringes here, and like the ultra-wide lens, both lenses can be used for the rear and front-facing cameras.

Olloclip includes three wearable pendants (black, red and orange), plus a lanyard and keychain in the box for easier portability. MSRP: Active Lens for iPhone 6/6 Plus and 6s/6s Plus, $99.99. olloclip.com

This company’s pedigree in lens attachments has been reserved more for DSLRs and mirrorless cameras, but Lensbaby has improved on its mobile offerings with this Creative Mobile kit. It includes the LM-20 and LM-30 lenses, each with their own optical effect while shooting images. The LM-20 enlarges the focusing sweet spot and surrounds it with a radial blur that is more pronounced toward the fringes. The LM-30 does the same, yet surrounds it instead with reflections for an artistic effect.

Lensbaby’s free app for both iOS and Android does enable phoneographers to focus on one area by tapping on it and then letting the lens and software do the rest. Adjusting settings and adding filters is also an option for postproduction within the app.

Unlike the LM-10, these lenses don’t rely solely on a magnet to stay affixed, utilizing a slide-in body to stay in place. The design choice makes the kit lenses more utilitarian, where they can fit a number of Android handsets and the iPhone, going back to the 5 and 5s. $89.95. lensbaby.com

Coming almost out of nowhere, Moment made some big strides in 2015 with its wide and telephoto lenses, each of which have received acclaim from the technology press. With a

premium finish and solid optics, the lenses are unusual in that they stay fixed onto the phone’s body with an adhesive-coated mounting strip. This strange tweak also affords users the option of placing the lens over a case rather than the phone’s body. With lower fisheye, less vignetting and crisp sharpness, each lens offers a 2x effect—wider for the wide angle, closer for the telephoto.

A free app for iOS and Android can help phoneographers line up shots with an on-screen grid, while also adjusting certain settings to improve composition. As a bonus, the lenses will work with any third-party app. $99.99 each. momentlens.co

One-part case, four-parts lenses, this kit is a mix of Ztylus’s two key product lines that work together as mobile photography and videography tools. The metal case holds the revolving lens system in place but also features a removable disc (with kickstand) that acts as the mounting mechanism. In lieu of the revolving lens, the company’s LED ring light attachment can be installed to help light a subject.

The 4-in-1 system includes a macro, wide-angle, fisheye and CPL lens, which can be switched easily because each lens sits in its own holder, popping out in line with the phone’s lens. A simple flip of the wrist is enough to change lenses without having to remove or reorient anything. Compatibility is limited to the iPhone, with varying sizes going back to the 5 and 5s. $114.95. ztylus.com

Designed as a multi-lens system that will work with select iPhone and Samsung devices, the Iris lens series also doesn’t seem to care if there’s a case present. This is done by using a specific mount that slides in between the phone and the case to align the lens to the phone’s optics. An elastic cord keeps the lens in place, doubling as a cap that can be affixed whenever necessary. When removed, unwinding the cord and putting the cap on can turn the system into a carrying case for the phone.

Lenses come in three varieties: wide angle, macro and fisheye. They are interchangeable and can fit onto the system at any time. Only the iPhone 6, 6s, 6 Plus, 6s Plus, Samsung Galaxy S5 and Galaxy S6 are currently supported. $139.99. photojojo.com

Turning an iPhone into more of a videographer’s toolkit is made easier with iOgrapher’s unique polycarbonate case to help maintain steady hands. The case has threads on the bottom and right handle for mounting on a tripod in landscape or portrait, the latter appearing to be a concession for Periscope and Meerkat broadcast streaming. Two cold shoes on the top can fit lights or microphones for a more complete rig.

A 37mm lens thread can fit iOgrapher’s own lenses, though any lens of a compatible size can be added to improve the phone’s focal depth. There are separate models for the iPhone 6/6s and 6 Plus/6s Plus, which only differ in size to accommodate each phone’s dimensions. $59.99. iographer.com

Having an iPhone 6 or 6s doesn’t mean POV action camera footage is out of reach. The Hitcase Pro is a rugged case that works with the company’s railslide mounting system to give users the chance to shoot footage from a unique perspective. Like typical waterproof cases, the Pro can take the phone down to 33 feet and withstand up to a 6-foot drop to the ground. There’s access to the Lightning port, the touch screen works, and Hitcase claims microphone fidelity for video recordings is the best in the business.

Few mounts or tripods have the combination of being truly flexible and adding magnetic surfaces to the mix. The GorillaPod Magnetic is meant to be universal, working with any smartphone make and model, with or without a case. It uses a spring-loaded clamp holder with rubber cushions that can expand to accommodate a variety of different phone sizes. It connects to the lower body, made of the three flexible legs Joby is known for. The legs have magnetic feet at the bottom to attach to most metal surfaces and they can also wrap around any object.

Coming in regular and XL form factors, the latter can be especially useful for large phablets and phones using bulky shockproof or waterproof cases. All told, either size can handle a capacity of up to 325 grams. $39.95. joby.com

Waterproof, shockproof, snowproof and dirtproof, LifeProof’s Fre line isn’t new, but the fact a battery was squeezed into this case adds a unique advantage to the Fre Power. With the durable body still opening the door to photography underwater, in the snow, on the sand and everywhere in between, the case isn’t specifically a photography accessory. But it may as well be when it is able to bring the iPhone into shooting situations it otherwise couldn’t handle.

With other accessories, particularly mounts and some lenses, capable of working with thicker cases, the Fre Power doesn’t have to inhibit shooting with other tools to improve performance and composition. LifeProof claims 2x battery life for the iPhone 6/6s, which may prove useful in instances where shooting takes users away from a charger for a while. $129.99. lifeproof.com

Smartphones are capable of some great photography under the right circumstances, but they aren’t always the most convenient when it comes to tapping the shutter. Shooting in low light without using a timer or a pair of hands is an example. Self-shooting a group selfie is yet another. The HISY camera remote is a fairly simple product that pairs with iOS and Android phones via Bluetooth to control shooting stills or video clips up to 90 feet away.

It’s available in a variety of different colors and sports a unique round form factor that isn’t typical of a remote. Small and light, it’s easily carried around on a keychain or in a pocket. $24.99. hisypix.com

With 40 LED lights diffused through a white panel, the Nova acts as a wireless flash or external light source paired with an iPhone via Bluetooth. Using a dedicated app, it’s easy to toggle between three distinct lighting modes aimed at soft or brighter light, depending on where and when the shot is taken. Setting up custom light is easy enough, while an advanced mode offers full manual control in choosing color temperature and brightness.

The credit-card-shaped Nova isn’t razor thin, but it is still more than portable enough to be taken just about anywhere for planned or spontaneous mobile photography. Battery life tops up at about 150 flashes per charge, and it can be recharged fairly quickly using a portable charger if out in the field. $59. novaphotos.com