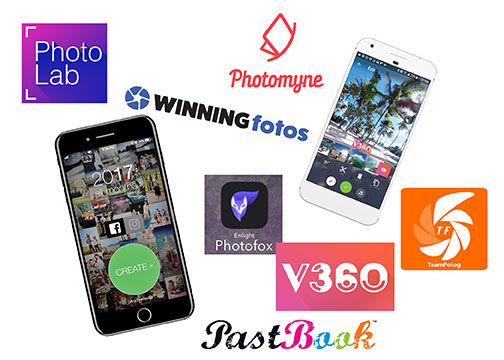 There’s a danger in developing a successful photo app. If it really gets traction, one of the Big 5 platform vendors—Apple, Facebook, Microsoft, Google, Amazon—will take notice and mimic the imaging apps or acquire the company. (The latter was the not unwelcome fate of Regaind. Its Keegan app was described in last year’s great imaging app roundup as the winner of the Mobile Photo Connect Best Technology Award. Apple has since acquired the start-up).

Or in the end they might decide to leave you alone if an app like yours isn’t deemed strategic enough for their business to develop themselves or to acquire.

Such are the scenarios successful app developers face. But it’snot a heck of a lot different than what I’ve witnessed in the desktop era when desktop publishing platform vendors like Quark and Adobe always kept a clear eye on what to mimic or who to acquire among plug-in, add-on or extension developers.

As I’ve done in the last two years, I’m presenting eight independently owned imaging apps that are pushing the envelope. They each address very specific use cases and are getting traction in their respective markets. Let’s start with the four that recently received accolades from the Visual 1st (formerly Mobile Photo Connect) conference judges.

Winner of the Best of Show Award at the recent Visual 1st conference, this app, from the Israeli company of the same name, offers an efficient way to scan, auto-crop and restore colors of legacy printed photos. And it safely backs the photos up in the cloud. The company aims to build the world’s largest archive of pre-digital images.

Awards judge Geraldine Le Meur, commented: “Although Photomyne is still at a very early stage, they’re on track to solve an important problem: how to protect our pre-digital era visual memories and pass them on to the next generation. I especially like their vision of wanting to become the “Instagram of the Past,” as well as to index photos with AI to recreate memory connections.” photomyne.com

Based in Amsterdam, PastBook approaches memory preservation from a different angle. It offers a one-click solution to create printed photo books from large photo selections in a user’s Facebook, Instagram or other accounts. As opposed to most everyone else in the photo output industry, PastBook’s busiest season is not Q4 but Q1, when their users create photo books from their social media photos taken in the previous year.

Awards judge Haje Jan Kamps explained why PastBook earned the Best Business Potential Award: “With mobile photo printing solutions becoming a commodity, PastBook manages something that is kind of magical in the photo printing industry. It generates recurring revenues through annual personalized yearbooks. What’s more, these yearbooks tie into the social graph and leverage the viral power of social networks. I imagine that PastBook will make piles of money!” pastbook.com

Winner of the Best Technology Award app, it enables 360º video editing directly on one’s phone. Its features include sorting and trimming 360º footage, adding music and rendering the edited video.

Judge Andy Kelm summarized his take on V360: “V360 solves a very clear problem, with lots of 360º content being generated and no easy way to consume it. The company is clearly at the early stages of what I expect to be a very large market.

“Having been around mobile and photos for a very long time, I especially like that V360 is mobile-first rather than adapted to mobile. It also has great B2B potential.” getv360.com

The winner of the Special Recognition Award, it shows maps seen through the lens of photographers who have previously explored the area. It overlays maps with curated photos to give users a taste of the local flavor of each block, neighborhood or city.

According to judge Jackie Dove: “I really like how Streetography mixes photography with street maps to give users an entirely new way of looking at specific neighborhoods or cities. Streetography adds a ground-level experience and context to maps that we don’t see anywhere else. I appreciate that Streetography is based on crowdsourcing and that people could contribute to it, and that location coverage enjoys continued growth.” streetography.com

Taking on Photoshop with an all-around imaging app is a hopeless endeavor, right? Not so fast, Israel-based Lightricks must have thought. The company’s first product was their best-selling Facetune selfie-enhancement app, followed by Enlight, its more all-around imaging-focused sister app.

Its latest edition, Enlight Photofox, features layers among other enhancements. But its most commented change was a business one. The core of the formerly paid app was turned into a freemium app, to which extra features can be added through one of its subscription plans. If that sounds familiar to Photoshop CC, it is probably not a coincidence. photofoxapp.com

This popular app counts more than 100 million downloads. And it keeps pushing the envelope, not only with its 1,000 classy effects and precise AI-powered silhouette selection, but also with its more recently added combo feature. Users can now apply a series of effects one after another, which are stored as its own sequence of effects.

The social and viral part comes in when the user shares that photo within the Photo Lab community. This way, other users get an idea of what these effect combos look like before applying them to their own photos—call them crowdsourced effects. photolab.me

This app solves the missing athlete conundrum that sports youth teams often face when athletes are missing on picture day.

The app lets you add his or her photo later.

This is a do-it-yourself solution for team owners. Team Fotog enables its users to create a team site by inputting the team logo and roster. They can then share the athlete photos in a gallery.

Parents or fans can then order photo prints through Walgreens. teamfotog.com

This imaging app enables its business customers to find and acquire user-generated photos that meet their particular needs. It does so by hosting photo challenges and inviting businesses’ (potential) customers to critique the images in a private label app.

WinningFotos then does its machine learning magic by extrapolating also the emotional value from these images. The result is that the businesses receive a collection of the most suitable photos, while WinningFotos helps them to streamline the royalty and licensing process so they can easily use their selected photos. winningfotos.com

Hans Hartman is chair of Visual 1st (formerly Mobile Photo Connect). The global conference focuses on promoting innovation and partnerships in the photo and video ecosystem.