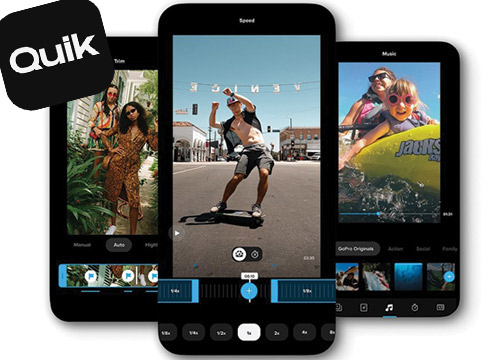 San Mateo, CA—GoPro released a total refresh of its mobile app and gave it a new name to reflect its purpose. Named the GoPro Quik app, it makes it quick and easy to get the most out of favorite photos and videos—no matter what phone or camera captures them.

“Quik makes it simple and fun to finally make sense of the vast number of photos and videos we all have on our phones,” said Nicholas Woodman, GoPro founder and CEO. “You don’t even have to open the Quik app to organize your images; simply share your favorite shots directly to Quik from your camera roll, text threads or wherever your best shots are. We named it Quik because that’s what it is!

“Helping people get the most out of their personal content represents an enormous long-term opportunity for our business and brand,” added Woodman.

Quik is available for iOS and Android devices. It supports unlimited imports of photos and videos from any modern phone or camera, including GoPros and DSLRs. Moreover, at its core, the app solves the “black hole” problem of a smartphone’s camera roll; it helps ensure users will never lose track of favorite photos and videos. The next time users capture a special photo or video, they can share it to the Quik app where it is added to a private “mural” feed within the app.

They can also share images that already exist in a phone’s camera roll, text threads or wherever favorite images are stored. Furthermore, if multiple photos or videos are shared at once to Quik, they’re grouped together as an event. In addition, the app will produce a compilation highlight video beat-synced to music. What’s more, users can make adjustments to their liking.

Quik also features a suite of editing tools for those who want to edit their photos and videos. They can adjust exposure, contrast, color as well as vibrancy. In addition, they can get creative with intuitive single and multi-clip video editing, as well as add text and stickers. 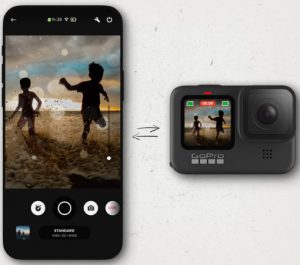 Also, GoPro exclusive filters allow users to select from dozens of filters, including many optimized for natural environment looks, like snow, desert and water. Further, a new video speed tool lets them speed ramp videos faster or slower. It also enables them to add super slo-mo and freeze frame segments at multiple points within in a video clip. And users can choose from a list of video edit themes to give their videos a particular style.

Of course, the app provides automatic video creation. Users can create music-synced videos by selecting the photos and videos they want to include along with a royalty-free track curated by GoPro or a song of their own. Another feature is frame grabbing, which extracts a photo from a video.

In addition, the app will include unlimited cloud backup later this year. Every photo and video posted to a Quik mural feed will back up at its original quality. Users can also post directly to Instagram, Facebook, YouTube and other platforms, as well as share via text or e-mail.

Quik is free to download and use on a trial basis. Customers who want to unlock the app’s full capabilities can subscribe for $1.99/month or $9.99/year. This will include unlimited cloud backup of imported photos and videos at their original quality when the backup feature is released later this year.

What’s more, GoPro subscribers who pay $49.99/year get all the benefits of a Quik subscription plus $100 off up to three new GoPro cameras a year; up to 50% off accessories at GoPro.com; unlimited cloud storage of GoPro photos and videos at original quality; livestreaming from a GoPro to GoPro’s premium streaming platform; as well as guaranteed damaged camera replacement.

As Quik replaces the GoPro app in iOS and Android app stores, existing GoPro app users will see their app update upon install. Existing users’ photos and videos will transfer from the old GoPro app to the new Quik app upon install; any cloud-based footage will remain accessible.