Jerusalem, Israel—miggo, a young brand that develops products designed for today’s advanced digital cameras, announced that Pictar, its camera grip for the iPhone, is shipping. Pictar One can accommodate standard-sized iPhones. A larger model, Pictar One Plus, works with plus-sized iPhones.

Pictar’s key features include five user-programmable wheels and buttons for control over the iPhone’s camera. And its ergonomic, slip-free grip is designed for one-handed use. In addition, Pictar provides communication between the hardware and an app via ultrasonic sounds.

“When we launched the crowdfunding campaign for Pictar in 2016, we were blown away by the reaction and feedback we received from media and consumers alike,” said Guy Sprukt, cofounder of miggo. “We set out to develop a solution addressing an unmet need and wanted to put forth an accessory that would make the iPhone feel and shoot like a real camera. We could not be prouder of the result. We’re confident that Pictar will be well received among consumers and are eagerly awaiting what they’re able to do and create once they snap in and start taking images.”

Although the iPhone camera has significantly increased in quality with each new model, the physical design of the phone has remained basically the same. Thus, it offers no ergonomic solution to users looking for a comfortable photo-taking experience. With complete control over the iPhone camera, a user-friendly app and Pictar were developed to elevate not only users’ photos and videos but also the photo-taking experience itself.

Pictar communicates with the iPhone via a dedicated camera app that unlocks key features inaccessible on the native app. Each of the physical controls found on Pictar drive a specific function or setting using high-frequency dual tone sounds. Each physical control is assigned a specific tone. With each turn of a dial, press of a button or turn of a wheel, Pictar omits a sound that, when detected by the app, generates a corresponding action. The high-frequency dual tone (18,500–20,000 kHz) is inaudible to the human ear.

According to miggo, it also significantly increases battery life when compared to Bluetooth connectivity. Using a readily available, standard CR ½ AA battery, miggo estimates 4–6 months of use before the need to replace the power source is required.

Pictar also provides a multi-state shutter button to lock focus and exposure and trigger the shutter. Furthermore, a zoom ring allows users to zoom in and out with one hand. There is also a selfie button to switch between front and rear cameras.

Other features include an exposure compensation wheel and a smart wheel that offers quick access to preset modes. These include manual, shutter priority, sport, landscape and macro modes. Pictar also provides a tripod mount and a cold shoe to attach LED lights.

While functionality was key to miggo’s vision for Pictar, so was the physical design of the device. After conducting extensive research into how users capture images with their iPhone, shortcomings that surfaced were poor control and an uncomfortable grip. As a result, miggo designed Pictar with classic cameras in mind. It was engineered to allow a firm, comfortable grip with buttons and dials placed to align where a user’s fingers fall.

Moreover, it gives users the ability to operate their iPhone camera with just one hand, even when wearing gloves. The grip also helps prevent accidental drops and improves the sharpness of images. 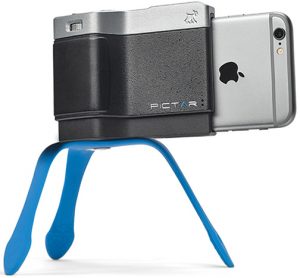 Included with Pictar is a hand strap, neck strap and carrying case. On its bottom is a ¼-inch 20 standard connection for a tripod. On top is a cold shoe connection for external lighting.

Pictar One and Pictar One Plus are available now at select retailers for $99.99 and $109.99, respectively.

miggo was founded 2013 by a group of designers with extensive experience in developing award-winning camera cases and bags. They also shared a passion for bringing to market innovative concepts for carrying and supporting cameras. In three years, miggo expanded its portfolio to include patented camera carriers, multifunctional camera and binocular straps as well as compact tripods. The company’s products are marketed in more than 30 countries around the world. mymiggo.com