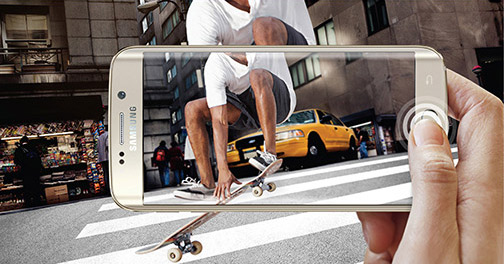 What may come as a surprise to camera people is just how advanced—how camera-like—this year’s super smartphones have become. True, smartphone cameras still suck at zooming, but they’ve advanced on nearly every other imaging front. Smartphone marketing types are now nervy enough to drop camera-centric language into their sell copy to billboard the image-capturing sophistication of their wares. For instance, only two smartphones included optical image stabilization (OIS) in 2014. Now more than a dozen smartphone cameras are thus jitter-proofed. OIS is nearly de rigueur for smartphone makers in any model with pretenses to be considered a superior snapper.

And all of sudden, smartphone makers are beginning to brag about their apertures. A lot more models feature f/2.2 lenses or larger. The Acer Jade Z, LG G4 and V10, and the ZTE Axion Pro, for instance, are among the growing number of models that sport f/1.8 apertures, the largest available. The result is advances in conquering the other traditional cameraphone shortcoming—low-light image quality.

Just as they are in premium point-and-shoot and mirrorless digital camera models, smartphone cameras’ BSI CMOS image sensors also are getting larger. Not exactly APS-C size, they are large for smartphones. Most high-end smartphones are now equipped with at least 1/2.6-inch image sensors.

And the pixels on those imaging chips are getting larger as well. Most recent smartphone sensors are packed with 1.12µm pixels, but most super phones’ pixels are growing faster than a teenager. This year’s pixel size champ: the Google Nexus 6P with 1.55µm dots. But not everyone’s pixel specs are ratcheting upward. Apple’s iPhone 6-series camphones were the pixel-size champs at 1.5µm. But the iPhone 6s/6s Plus shrunk the pixels back down to 1.22µm; that’s not necessarily a bad thing, as we shall see.

Here are the top smartphone cameras in the market today, all of which capture 4K video and panoramic stills. They also include HDR enhancements and, unless noted, OIS. In order of reviewer rhapsody . . .

Apple also has improved its already highly regarded camera by bumping the resolution from 8 megapixels to 12MP. Yes, the pixels are smaller this year but there are more of them, and the iPhone 6s is equipped with a more powerful A9, 64-bit processor—all of which boosts low-light performance. Even though the lens stays at f/2.2, Apple upgraded the front FaceTime camera from 1.2 to 5MP. And, in a “why didn’t anyone think of this before” feature, the new Retina True Tone flash uses the iPhone’s 5.5-inch screen to illuminate selfies. Other photo features include: burst mode, auto HDR, a hybrid IR filter, exposure control, auto IS, improved noise reduction and face detection. apple.com

Look beyond these sibling smartphones’ semi-useless curved-edge displays to see arguably the top Android shooters available. And, the same basic camera can be found on Samsung’s other S6-series smartphones, along with its Galaxy Note 5. But the 5.1- and 5.7-inch-screen edge/edge+ are just the coolest models of the bunch.

The 16MP rear camera is equipped with an f/1.9 lens and an above-average 1/2.6-inch CMOS sensor, and there’s a 5MP front camera. A combination of the company’s video digital image stabilization (VDIS) with optical image stabilization (OIS) reduces jitter and lifts low-light focusing capability. Also added is live streaming, which lets users live stream video via YouTube rather than being restricted to a specific social media or streaming app. Other photo features are fast motion and slow motion capture, and video collage. samsung.com

Thanks to its literal laser focus and largest-for-a-smartphone f/1.8 aperture lens, the G4 captures 80% more light than its predecessor, the G3, and so produces perhaps the sharpest photos and video in low light of all smartphone cameras. Helping to improve image quality is LG’s smartphone-first Color Spectrum Sensor (CSS), which detects the RGB values of ambient light and reflected infrared to adjust the camera’s white balance and flash color to create natural colors.

Also bumped up from the G3, the 5.5-inch-screen G4 pairs a 16MP rear camera (from 13MP) with a nearly quadruple 8MP front facer. The image sensor grows from a 1/3 to a 1/2.6 inch, while its twice-as-effective OIS 2.0 creates the first three-axis stabilization system. Best of all, the G4 features a raft of manual photo controls, including shutter speed, frame rate, ISO, white balance and focus, and it also captures RAW files. lg.com

No other smartphone camera comes with so many strange and unique features. For instance, there’s tri-camera manual shooting. Coupled with the 16MP rear camera and f/1.8 lens are twin 5MP front lenses—one that captures more-or-less standard 80º photos, the other wide-angle 120º panoramas. And users can shoot video through all three lenses simultaneously.

There are also multiple auto and manual editing options, “quick share” for one-button social media posting and OIS. Along with its sibling’s manual controls, the V10 can shoot video in two aspect ratios: 16:9 or ultra widescreen 21:9. It also improves video sound performance thanks to its three mics. This gives users control over left/right stereo options, along with a wind noise filter. lg.com

Spec-wise, the P6 packs an f/2.0 lens, employs laser focus and, as previously noted, is the category’s pixel-size champ at 1.55µm. But there’s no OIS; Google says the larger pixels negate the need. Reviewers have been mixed in their views on the results. google.com/nexus/6p

Some reviewers have ranked the quality of Moto X’s camera and resulting photos behind only the Samsung S6-series models among Android shooters. It packs a plethora of bleeding-edge smartphone features into a relatively cheap phone (around half the price of its super phone competition). The splashproof, 5.7-inch-screen Moto X Style Pure Edition features a Sony 21MP, 1/2.4-inch camera module, the highest resolution snapper in the market, and an f/2.0 lens.