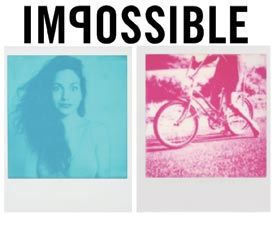 New York, NY—Earlier this year, Impossible released test films for 600 and SX-70 cameras that featured monochromatic emulsions in cyan and magenta. Cyanograph and Magentatype, as they were called, were instantly popular with Impossible’s more adventurous photographers. Following an unprecedented number of requests, Impossible decided to develop these films as part of its standard range of products.

Cyan and Magenta 600 Monochrome for Polaroid 600 cameras and its Instant Lab are now the first in a new series of Impossible monochrome and duochrome color films that offer an experimental twist on conventional B&W and color films.

“We have been experiencing a huge demand for films that take users out of the ‘norm’ of the classic square, white frame everyone recognizes as a ‘Polaroid,’” said Creed O’Hanlon, Impossible’s chief executive officer. “Impossible photographers like to push the boundaries of their creativity, and we try to support them with a range of different instant film materials.”

For the past six years, Impossible has continued to refresh a medium that many once believed to be dead but is now one of the hottest segments in the photographic world. The small company, whose creative headquarters is in Berlin, Germany, has strived to shift photographic taste from the virtual to the visceral with a range of color and B&W films for Polaroid SX-70, 600 and Image-Spectra cameras, large-format 8×10 and its own-branded hardware, notably the Instant Lab. The Lab enables digital images on an iOS or Android smartphone or tablet to be converted into “real” instant photographs. the-impossible-project.com