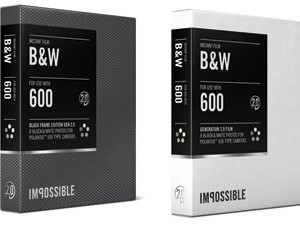 New York, NY—In late 2013, Impossible introduced a range of B&W instant films for classic Polaroid 600, SX-70 and Image/Spectra cameras, as well as for its Instant Lab. For the first time, these films used chemistry entirely developed by Impossible, to deliver better sharpness, contrast and stability, as well as faster processing speeds.

B&W 600 Generation 2.0 film is only for classic Polaroid 600 instant cameras and Impossible’s new Instant Lab Universal, which transforms images on iOS and Android smartphones and tablet into real instant photos. Versions of the B&W Generation 2.0 formula for Polaroid-format SX-70, Image/Spectra and large-format 8×10 cameras will be available worldwide in May.

“This is our first truly instant film,” said Oskar Smolokowski, Impossible’s CEO. “With image emergence at 20 seconds, we are now making the fastest analog instant film in the market! Contrast, tone and ease of use are also significantly beyond what we’ve delivered before. I’m really proud of our team for this achievement.”

He added, “We’ve held off labeling any of our films ‘next generation’ until we felt they truly were. Now, after three years of intensive development, we are proud to call this film Generation 2.0. Only two other milestones in Impossible’s brief history are as important: the very first pack of usable film we produced in March 2010; and the first Impossible film that didn’t need to be shielded from light, in September 2012.”

Impossible B&W 600 Generation 2.0 film was released in March to coincide with the fifth anniversary of the production of the first Impossible instant film—also a B&W film—on March 22 at the former Polaroid factory in Enschede. the-impossible-project.com