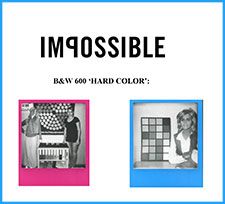 New York City, NY—Continuing its approach of “disrupting” the classic square white frame associated with Polaroid instant photography, Impossible has created a black-and-white film in which each pack of eight images are framed in eight different vivid colors.

B&W 600 Hard Color film is the latest in a series of Impossible special and limited edition films that offer not just alternatives to a white frame—black, silver, gold, various colors and even animal skins—but also different colored film emulsions, including cyan, magenta and sepia.

“For the past six years, the still very small company has exerted an increasing influence on popular visual culture, shifting taste from the virtual to the visceral with a wide range of color and B&W films for Polaroid SX-70, 600 and Image-Spectra cameras, large-format 8×10 and our own-branded hardware, notably the Instant Lab, which enables digital iPhone images to be converted into real instant photographs,” commented an Impossible spokesperson.

Impossible’s B&W films have recently undergone a complete chemical “redesign” under the supervision of its new chief technical officer, Stephen Herchen, who worked directly with Edwin Land as the CTO of Polaroid. The tonal range, contrast and sharpness of Impossible’s latest B&W films were all improved, along with their faster development time.