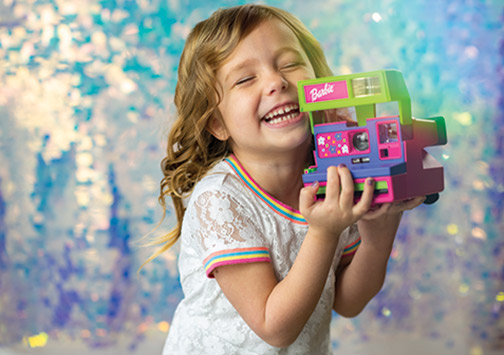 In addition, Retrospekt manufactured the Polaroid and Mattel officially licensed camera with refurbished parts from vintage Polaroid 600 instant cameras made in the 1980s and ’90s. Moreover, they are restored to work just like new. What’s more, the original parts are integrated into freshly molded plastic housings sporting the classic Barbie logo and colors. The restored internals as well as redesigned exterior provide the quintessential instant photography experience wrapped in a classic Barbie package. In addition, the cameras are fit for instant film novices and seasoned pros alike.

The new Barbie camera shoots Polaroid Originals 600 color and B&W film. In addition, the each film pack has built-in batteries.

The camera was available for the first time via Retrospekt (retrospekt.com/barbie) on March 8, 2020. Consumers can also buy the analog film camera on future stops of the Barbie Truck Totally Throwback Tour. The traveling pop-up merch truck is celebrating Barbie’s 60-year iconic heritage and the fans who love her.

Polaroid is one of the world’s most recognizable brands, with a rich 80-year history built primarily on Polaroid instant cameras and film. The company’s complete range of products delivered the fun, instant gratification and creative freedom for which the brand stood.