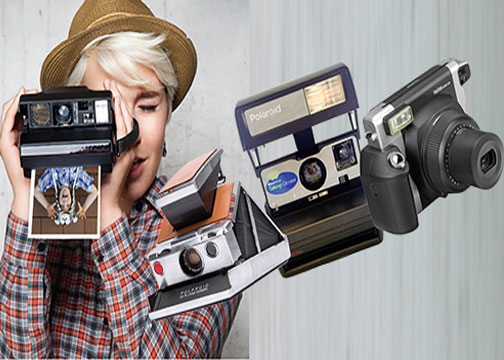 Can you still get film for that thing?” people ask when they spot me shooting with one of my vintage 35mm SLRs. When I tell them you can still buy 35mm color print film and one-time-use film cameras at Walmart, they’re often astonished. While it’s highly unlikely that film will ever replace digital as the primary image capture medium, analog photography is currently doing quite well as a robust, multifaceted niche. And it is unlikely to be relegated to the dustbin of history anytime soon.

Everyone from millennials to seniors seems to be captivated by instant picture cameras that combine the immediate gratification of digital photography with an old-fashioned physical print. Andby the way, this category is expanding by leaps and bounds.

Major retailers offer dozens of brand-new film cameras from humble Holga “crappy” box cameras to luxurious Leicas and Linhofs. And if you cruise the vintage camera listings on eBay, you’ll find classic film cameras like the Hasselblad 500C/M that you could snag for $400 (complete with a lens and 120 back) in the depth of the film camera bust of 2005 now command respectable prices in the $800–$1,250 range. To give you a better idea of what’s going on in Analog World, let’s take a look.

Instant Picture Cameras on the Upsurge!

The Impossible Project was one of the pioneers of the instant picture camera resurgence. It’s still going strong but rebranded as Polaroid Originals, with a range of fascinating and amusing models, proving that nothing is impossible if you keep at it with diligence and creativity. Note: The Impossible Project’s largest shareholder, energy tycoon Wiacezlaw “Slava” Smolokowski, recently acquired the Netherlands-based Polaroid Originals, bringing the Impossible line of refurbished Polaroids and a lineup of new and vintage Polaroid cameras, as well as instant films, under one roof.

What kid or kid at heart could possibly resist this wonderfully wacky pink, green and multicolored creation that’s a refurbished “gaudified” version of an old Polaroid 600 camera fitted with a new “frog tongue” that pops out as the prints are ejected! This fixed-focus beauty even has a built-in auto-flash, a lighten/darken control and an integral sliding close-up lens. It accepts 600-type instant film packs, each of which contains a battery that powers the beast. $179.

A more sedate looking gray version of the camera described above, this updated refurb offers the same exact array of features as the Barbie, including the frog tongue.

However, it adds recorded messages you can play while shooting, presumably to entertain your subjects and elicit smiles. Sorry I can’t quote any of its snappy patter, but I can tell you it also uses 600-type instant film packs. $179.

Its 106mm lens maintains sharp focus from 2 feet to infinity, and it has a built-in flash and self-timer. It also comes with a USB cable for charging its built-in 1300mAH Li-Ion battery pack. $99.99.

This refurbished vintage model has a built-in automatic electronic flash, a 106mm f/14 lens that captures sharp images from 2 feet to infinity, and shutter speeds from 1/3–1/200 sec. It’s powered by a film pack/integrated battery and is fitted with a new film shield. $139.99.

A refurbished masterpiece of vintage technology, this elegant, folding SLR in silver and brown focuses its 4-element, 116mm f/8 glass lens via a geared wheel, provides automatic variable shutter speeds from 1/180 sec to 5 sec and apertures from f/8 to f/90. It uses SX-70 instant film. Fitted with a new film shield from Polaroid Originals, it is powered by the integral battery in each film pack. $399.99.

Note: Polaroid Originals offers an extensive range of new and vintage Polaroid cameras, including 600-, Spectra- and SX-70 cameras plus a wide variety of Polaroid films of various types, including large format. Check them out at us.polaroidoriginals.com.

Fujifilm is a leading contender in the instant picture photography sector, and all of its cameras take highly regarded Fujifilm Instax instant color film. The film is available in wide, square and mini formats to suit various Fujifilm and other camera models.

This little cutie produces credit-card-size prints. It has a 60mm f/12.7–32mm Fujinon lens that’s in focus from 2 feet to infinity, an optical viewfinder with target spot, a built-in flash and an autoexposure mode.

It also provides a selfie mirror on its lens surround, a manual brightness adjustment and a creative high-key mode. It also comes with a macro lens attachment for close-ups. The mini 9 is available in flamingo pink, cobalt blue, ice blue, lime green and also smoky white. $59.99.

This retro-styled beauty has a 60mm Instax lens that’s in focus from 11.8 inches to infinity and a built-in flash. It also provides an autoexposure mode, six shooting modes, including landscape, double exposure and macro mode, and a manual brightness control.

Its built-in tripod socket comes in handy when shooting exposures up to 10 sec in bulb exposure mode. It produces credit-card-size prints on a wide rang of Fujifilm Instax mini film. $119.99.

It also features a 0.37x optical viewfinder with target spot, autoexposure via the programmed shutter, a film pack window, a +/- 2–3 EV lighten-darken control and a tripod socket. An LCD screen displays the number of shots remaining, exposure compensation and flash mode. It comes with a close-up lens adapter and runs on four AA batteries. $109.99. fujifilmusa.com

This ingenuous, pocket-size point-and-shoot model is a 10MP digital camera with an 8mm f/2 lens.

It captures images to a microSD card, then prints out borderless 2×3-inch prints directly from the camera, without a computer, on ZINK (zero ink) paper. The camera has an optical viewfinder, a built-in flash, and built-in autofocus.

There are also indicators for low battery, low paper and low memory card storage. A rechargeable Li-Ion battery provides the power. In yellow or white, $69.99. kodak.com

Lomography: Unusual as per Usual

Long a champion of unpretentiously arty film photography with modest film cameras like the original Russian-made Lomo 35, Lomography has embraced the instant picture craze with gusto. It offers a host of models that come in various trendy colors, but here are three that piqued our interest.

This cool kit includes the camera, which has a 90mm-equivalent lens with apertures of f/8 and f/22 and three focus zones. It’s bundled a 21mm-equivalent ultrawide attachment with matching viewfinder; a close-up lens attachment that lets you shoot subjects as close as 3.9 inches; and a dedicated “Splitzer” that lets you combine two separate images on a single frame.

In addition, an included lens cap doubles as a remote control. This programmed autoexposure camera has tripod and PC flash sockets as well as a small mirror for composing selfies. It also provides +/- 1-stop exposure compensation and comes with four colored gels for creating special effects, as well as a set of shooting technique cards. Four AA cells provide the power, and it uses Fujifilm Instax Wide film that produces 3.9×2.4-inch prints. In black, $239; in brown, $259.

This ingenious crossover camera outfit incudes a Lomo LC-A+ camera plus an accessory LC-A instant back. As a result, users can switch between conventional 35mm and Fujifilm Instax mini film that produces 2×3-inch prints. It has a Minitar 1 32mm f/2.8 lens and an optical viewfinder.

It accepts films from ISO 100–1,600 and shoots multiple or long exposures. Furthermore, it provides shutter speeds up to 1/500 sec and accepts accessory lenses. It also has cable release and tripod sockets plus a hot shoe. The instant back includes an automatic counter that indicates how many sheets of film remain, and it maintains the accessory compatibility of the original camera. $299.

The kit comes with four color gels primarily intended to filter the flash, and the camera requires four AAA batteries to power all operations. $149.

Note: Lomography offers the Lomo’Instant in a host of cool, trendy and continually updating styles and colors. lomography.com

Type “film cameras” into the search bar of virtually any major camera retailer’s website and dozens of brand-new traditional film cameras come up. These include 35mm, medium-format, large-format, pinhole and one-time-use cameras.

The non-disposables among them consist of low-end plastic roll film box cameras like the Holga or medium-format Diana and simple basic 35mm models that sell for under 50 bucks. However, they also include iconic classics like the Leica MP ($4,550), Nikon F6 ($2,449) and Linhof 6x9cm Technikardan 23S ($6,699.99).

There are also dozens of new 4×5 and 8×10 view cameras, some available on special order, made by such venerable manufacturers as Arca-Swiss, Linhof, Toyo and Wista. While the unit sales of any of these cameras is in no way comparable to their digital counterparts, they are nevertheless a testament to photographers’ continuing fascination with and commitment to analog photography that has experienced an uptick over the past few years.

Who would have believed 10 years ago that Kodak’s reintroduction of Ektachrome film would have received such an enthusiastic reception? 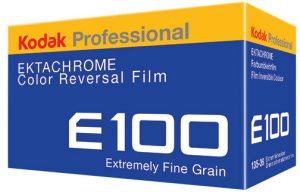 Some of the folks buying these analog masterpieces are collectors. But a surprising percentage are running film through them and having lots of fun doing it. No, analog photography will never replace the supreme convenience and flexibility of digital capture, but traditionalists can rejoice that it’s now hip to shoot film again.

The Japanese company that gave us the Yashica Electro rangefinder 35, which pioneered the electronically controlled leaf shutter, is reviving the venerable Yashica brand with something entirely different.

It’s a Kickstarter project dubbed the Yashica Y35. The camera is designed to give users much of the visceral, sensory experience of shooting film without requiring actual film! At present, the design isn’t finalized, but what’s described in the Kickstarter offering is definitely mind-boggling.

Essentially, the Y35 is a retro-styled compact camera reminiscent of a vintage rangefinder 35mm, complete with optical viewfinder and what looks like a top-mounted film wind lever. In reality it’s a digital point-and-shoot camera with a 1/2.5-inch, 14MP CMOS sensor that stores images on an SD card. However, before you can take a picture, you must insert a “film cartridge” that does not actually contain film but “pre-winds” to set the camera for the type of images the particular digiFilm cartridge turns out.

The Y35 has no LCD, so users have to view and delete images separately after capture. I assume (dangerous word) you have to stroke the wind lever before making each exposure. I’m also thinking the digiFilm cartridges are reusable since they don’t really contain film. According to the sparse spec sheet, the camera has: a 35mm f/2 4G lens; a high-speed electronic shutter powered by two AA cells that provides speeds down to 1 sec; a focus range of 4.5 feet to infinity (?); and a tripod socket. The camera is also Micro USB compatible for data transfers.

Will this latest Yashica actually make it to market? The project has exceeded its goal, reportedly raising nearly $2.5 million. Indeed, what other camera can deliver “a slightly eased undertone color and worn-out effects (that) bring silence, roughness, simplicity, intimacy and appreciation of the ingenuous integrity of the impermanence of your story”?