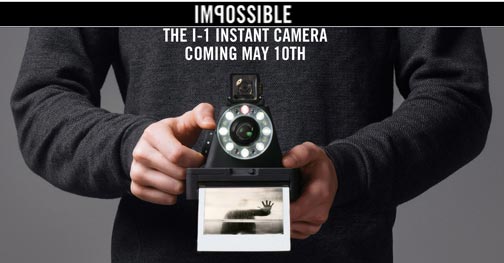 New York, NY—When Polaroid announced the end of instant film in 2008, Impossible stepped in, buying the company’s last remaining factory days before it closed down. The machines had already been dismantled, there were no formulas to follow and the supply chain had been destroyed. So Impossible had to reinvent instant film from scratch if it wanted to keep instant photography alive.

Today, eight years later, the company unveiled their latest innovation—the I-1 camera. Onstage at Bloomberg Businessweek’s annual design conference, the Impossible Project’s CEO, Oskar Smolokowski, introduced the I-1. The new iteration of the classic Polaroid instant format is designed to provide the original’s analog pleasures, but in a sleeker digital camera.

With autofocus, the camera is designed for easy operation, with few buttons and no knobs. To simplify lighting techniques, an LED ring flash circles the lens and automatically adjusts to ambient light and distance. And in true digital fashion, a dedicated iOS app and Bluetooth connectivity give instant photographers full manual control and creative tools. The app can be used to adjust aperture, shutter speed and flash settings, and it can remotely trigger the camera. It also incorporates preset effects for double exposures and open-shutter, light-painting photography.

Other new upgrades include a USB-rechargeable battery. The I-1 shoots with the Impossible Project’s 600-speed film, which the company had to reverse engineer from Polaroid’s discontinued 600 film.

The Impossible Project’s I-1 instant digital camera has a suggested retail price of $299.