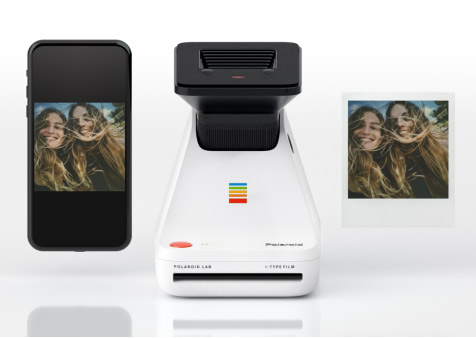 “Unlimited cloud storage can actually be your memories’ worst enemy; it causes your digital photos to skyrocket in numbers and end up falling into a void of oblivion. The idea behind the Polaroid Lab is that it turns your most precious smartphone photos into tangible Polaroid photographs; bringing them into the world as something you can hold in your hand and store on the fridge door rather than in the cloud,” explained Oskar Smolokowski, CEO of Polaroid B.V.

Polaroid Lab: How It Works

He added that the Polaroid Lab could not be easier to use. Users select an image from their smartphone via the Polaroid Originals app, before placing the phone facing downward on the platform. When the red button on the Polaroid device is pressed, the picture is projected onto the film. Then, using a combination of mirrors, light and the unique Polaroid chemistry, the image is recast as an instant photo that ejects from the Polaroid Lab. After the usual development time, the digital image is now a full-fledged Polaroid photograph.

In addition, the Polaroid Lab’s sleek white design is itself a statement choice for home or office, Smolokowski added. Moreover, the Polaroid Originals app allows users to experiment with image collages and augmented reality features. It provides “unprecedented creative control over your pictures before turning them into Polaroid pictures.”

Edwin Land founded Polaroid in 1937. Moreover, with the introduction of the breakthrough Polaroid SX-70 camera in 1972, instant photography as we know it was launched. The company followed with the original OneStep, instant colored film and the Polaroid 600 as well as Spectra cameras and film formats.

However, in the 1990s and 2000s, the swift rise of digital technology eclipsed instant photography. As a result, Polaroid announced the end of instant film production in 2008. A dedicated group of instant photography fans called The Impossible Project stepped in to buy the last remaining Polaroid factory. They continue to make film for vintage Polaroid cameras.

Moreover, the acquisition of the Polaroid brand by The Impossible Project’s largest shareholder in spring 2017 created the opportunity for Polaroid to return to analog instant photography.

The Impossible Project declared its mission accomplished. Today, Polaroid Originals provides analog instant photography gear for the modern era. The brand’s launch on September 13, 2017 marked the 80th anniversary of the founding of Polaroid.