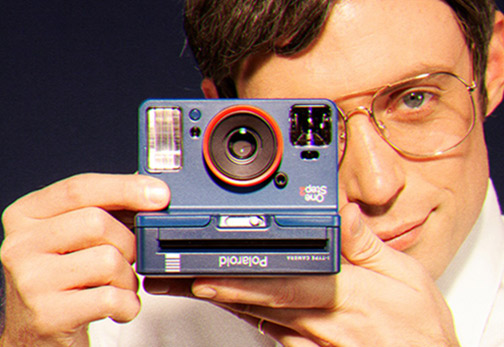 New York, NY—This summer, the widely anticipated third season of the Stranger Things sci-fi TV series lands on Netflix. To mark the occasion, Polaroid Originals joined forces with the master series to create an analog instant camera and special edition film that will turn the world “upside down.”

Beginning May 6, 2019, fans can brave the Stranger Things alternative dimension. Transformed into the TV show’s red and blue colors, the special edition instant film camera flips the classic Polaroid design upside down. Moreover, the company is inviting consumers to experiment with supernatural perspectives in instant film.

In addition, a collectable special edition film joins the Polaroid Originals OneStep 2 Stranger Things edition. As a further ode to the Stranger Things universe, each film pack of eight includes a selection of 16 graphic design prints. The designs will transport instant film photographers back to the summer of 1985 in Hawkins.

They can discover Scoops Ahoy at the town’s Starcourt Mall; and they can go back to the flashing lights of Joyce Byer’s living room. Stranger Things reimagines the early 1980s. Moreover, it is infused with popular culture from the period, from walkie-talkies and Fabergé Organic big hair to Dungeons and Dragons.

The new OneStep 2 instant film camera is optimized for today. It has a fixed-focus lens, a built-in flash, easy USB charging and also a self-timer.

The high-quality lens creates a sharp image from as close as two feet to infinity. In addition, the battery lasts up to 60 days. The camera works with a new generation of Polaroid Originals i-Type as well as 600 instant films.

Furthermore, with only a few buttons and an intuitive design, the camera is easy enough for all ages to use.

Moreover, it created instant photography as we know it today with the launch of the breakthrough Polaroid SX-70 camera in 1972. Landmark innovations followed, including the original OneStep, color instant film and the Polaroid 600 and Spectra cameras and film formats.

Polaroid Originals is the new brand dedicated to reinventing analog instant photography for the modern era. The brand’s launch on September 13, 2017 marked the 80th anniversary of the founding of Polaroid.