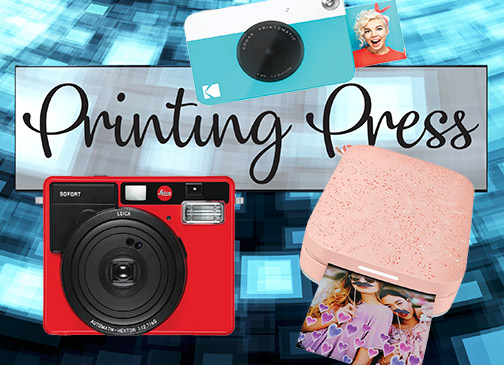 If you spot a teenager or twenty-something snapping photos on film, chances are they’re using an instant picture camera. That’s because these back-to-the-future picture takers offer an enticing sense of instant gratification. They provide an old-fashioned physical print you can hold in your hand, pass around or post on a refrigerator. In short, instant film cameras are a lot of fun. They are, in effect, a retro in-person version of social media with no screen time or smartphone required. Consequently, the instant print scene is continuing to revitalize.

In addition, mini portable photo printers also appeal to the young as well as the young at heart. Not only are they cool and compact, but they are also super convenient to use. Moreover, these printers can magically transform virtually any smartphone, tablet or digital camera into an instant picture camera.

For these and many other reasons, the instant picture category is an attractive niche for dealers and consumers alike. Indeed, everyone from kids and gen Z to seniors are captivated by instant picture photography. As a result, the category as a whole is expanding exponentially, with fascinating new cameras and printers aimed at everyone from casual shooters to serious enthusiasts and creative artists.

Here’s our selection of instant picture cameras and mobile printers to whet your appetite at the dawn of a new decade.

The Kodak Smile Classic instant print digital camera produces the largest instant prints from Kodak’s instant print lineup. It incorporates the contemporary technology of instant printing into a retro camera body for a nostalgic look. In addition, the camera is equipped with a pop-up viewfinder; an automatic single strobe flash; a microSD card slot; and a 10-second timer. Moreover, it features augmented reality (AR) capabilities.

The Smile Classic uses 3.51×4.25-inch Kodak Zink sticky-backed photo paper that prints instantly from the camera after a picture is taken. Users can also print pictures from a smartphone by connecting it to the camera via Bluetooth and the Kodak Instant Print app. Furthermore, before printing, images can be edited and enhanced in the free app. Most noteworthy, users can embed a 30-second video using the camera’s AR feature for added fun, which is viewable via the app. $149.99.

With retro styling reminiscent of mid-20th-century rangefinder cameras, this instant film model yields prints with a 3.9×2.4-inch image area on a 3.4×4.3-inch sheet using Fujifilm Instax Wide color film. It features a retractable 95mm f/14 lens with motor-driven focusing down to 15.5 inches and a lens ring dial with a two-range focus zone setting.

Other features include: a 0.37x optical viewfinder with target spot; autoexposure via a programmed electronic shutter; a +/- 2/3 EV lighten-darken control; an auto flash; a film pack window; and a tripod socket. An LCD displays the number of shots remaining, exposure compensation and flash mode. Included with the camera is a close-up lens adapter. Four AA batteries power it. In black, $89.95; in white, $109.99.

This instant film camera looks exactly like a classic Polaroid 600; that’s because it is. First released in 1981, the Sun 660 is complete with Polaroid’s innovative Intelligent Sonar AF system. The system accurately focuses its single-element 116mm f/11 lens down to 3 feet. The carefully refurbished beauty takes readily available Polaroid 600 film packs; each of which contains a fresh battery to power all exposure, AF and flash functions.

Moreover, the electronically controlled shutter covers a 1/4–1/200-sec range. Also, the built-in flash has a manual override setting for flexible shooting options in low light. In addition, the camera offers a slider-type lighten/darken control. Polaroid Originals installs a new film shield in each Sun 660 AF camera to ensure consistent and accurate development of each sheet as it’s ejected from the camera. $149.99.

Lomography offers several versions of this instant film camera, but we focus on the Magellan edition. The epitome of cool contemporary style, this sleek model features a 38mm f/4.5 multicoated glass lens that provides ultrawide 21mm-equivalent coverage. The camera uses the credit-card-size Fujifilm Instax Mini film/print format. Moreover, it focuses down to 11.8 inches for compelling close-ups, and it stops down to f/22 to maximize the depth of field.

In addition, the camera provides automatic and bulb shooting modes, and it comes with a set of colored gels to enable unlimited creative effects. It also features an ingenious lens cap that doubles as a remote release. Lomo furnishes it with an add-on close-up lens and an Automat Splitzer that lets users create multiple exposures and masked images. Other features include: a count-down frame counter; an optical viewfinder; shutter speeds of 8–1/250 sec plus B; and a built-in flash. Two CR2 batteries provide the power. $199.90.

This Kodak digital instant camera is an ingenious, pocketsize point-and-shoot camera with a 10-megapixel sensor and an 8mm f/2 lens. It captures images to a microSD card. Notably, it prints out the images as borderless 2×3-inch prints directly from the camera—without a computer. The camera prints on Zink (zero ink) paper. Moreover, the prints are water and tear resistant. And the camera offers both vibrant color and black & white shooting modes.

In addition, the Printomatic has an optical viewfinder, a built-in flash and built-in autofocus. There are also indicators for low battery, low paper and low memory card storage. It’s powered by a rechargeable Li-ion battery and comes in yellow, gray, black, blue and pink versions. $69.99.

This trendy looking digital instant print camera uses a 1/5-inch CMOS sensor to produce 1,260×1,920-resolution prints on credit-card-size Fujifilm Instax Mini film. The hybrid camera also prints from a smartphone via a Bluetooth connection. The LiPlay features a fixed 28mm-equivalent f/2 lens with a wide-angle perspective. The lens has a 3.9-inch minimum focusing distance for working with close-up subjects.

Moreover, the camera’s rear 2.7-inch LCD monitor is used for composing imagery, reviewing photos and navigating the printing menu. In addition, there is a small selfie mirror built into the front of the lens for composing self-portraits. What’s more, a unique feature is a sound recording button that lets users record audio and “attach” it to prints via a QR code; users can scan the code to hear the sounds while viewing the image. Other features include a built-in flash and a microSD/SDHC card slot. The LiPlay is powered by a rechargeable Li-ion battery. It comes in gold, black and white versions. $149.95.

Combining minimalist styling with high-tech features, this elegant Leica instant camera uses Instax Mini film that produces credit-card-size prints. It has a 34mm-equivalent f/12.7 Automatik-Hektor lens with a 3-zone manual focusing system that gets down to 11.8 inches in macro mode. It also features a 0.37x optical viewfinder with target spot and parallax compensation in macro mode. In addition, its mechanical shutter provides speeds of 1/8–1/400 sec.

The Sofort’s autoexposure system covers a 5–15.5 EV range at ISO 800, and its shooting modes include automatic; self-portrait; action; bulb; and self-timer. Other features include exposure compensation settings from +/- 0.7 EV; an integrated tripod socket; and strap lugs. The Sofort (which means “instant” in German) is powered by a 3.7-volt, 740 mAh battery that shoots 100 pictures on a single charge. $349.

Visually similar to the classic OneStep instant camera formerly sold by Polaroid Corp., this is a perky looking updated iteration from Polaroid Originals. Made of polycarbonate, it still makes 3.5×4.2-inch prints with a 3.1×3.1-inch image area using i-Type and 600 instant film. However, it can do a lot more than its predecessors. New features include a 106mm f/14–64 lens that can capture sharp images down to 2 feet (1 foot at the portrait setting).

It also has built-in Bluetooth connectivity that provides remote shutter control, double exposure capability, light painting and sound-activated shutter firing. A built-in flash and a 12-sec self-timer round out the camera’s features. In addition, its built-in 1100 mAh Li-ion battery lasts for up to 60 days per charge and is recharged through the camera with an included USB cable. It comes in both black and white models. $139.99.

Portable Mini Printers for Printing on the Go

This adorable mobile printer from HP lets consumers print directly from a smartphone or tablet via Bluetooth. The Bluetooth connectivity also allows users to view a shared album with Google Photos. Ultracompact, the Sprocket is about the size of a smartphone and prints out 2×3-inch photos or stickers using ZINK printing technology.

It has a back LED charge light that indicates its battery level and other functions. In addition, users can choose from six colors to customize the LED. Moreover, via the HP Sprocket app, images can also be customized before printing. The instant mobile printer comes in pink, black and pearl models. $129.99.

This ultracompact Kodak instant photo printer connects to Android/iOS smartphones via Bluetooth. Moreover, users can perform one-touch connections to print quickly and easily with NFC technology. The printer uses D2T2 dye-diffusion thermal transfer technology to produce vivid full-color 2.1×3.4-inch sticky-backed prints in less than a minute. The prints are also overcoated with a laminate that protects the image from fingerprints and water.

Moreover, via a dedicated app, users can customize photos with filters, templates and adjustment tools. At the core of this mini printer is an all-in-one cartridge that integrates paper and an ink ribbon. A 20 mAh LiPo battery that charges via a micro-USB connection provides its power. In white or black, $99.99.

For on-the-go printing, this diminutive mobile printer turns out water-resistant, smudge-proof, adhesive-backed 2×3-inch prints in full color in about a minute on thermally based Zink paper. It interfaces with Android/iOS devices via Bluetooth 4.0 and NFC connectivity as well as the Polaroid Print app.

The app enables phoneographers to place nine images on a single print; apply color filters and HDR; as well as enhance brightness, contrast and saturation. The Zip’s integrated 500 mAh Li-ion battery produces 25 photos on a charge. In black, aqua, red or white, $99.99.

This compact Canon photo printer uses dye-sub/thermal transfer technology. While it won’t fit in a pocket, it is small enough to take anywhere. In addition, it is powered by AC or an optional battery pack. The CP1300 turns out long-lasting water-resistant prints from 2.1×2.1 to 4×6 inches at up to 300 dpi. Moreover, it produces a 4×6 in 47 sec.

Users can print with AirPrint or a memory card, as well as from Facebook and Instagram via a smart device. It offers wireless PictBridge, USB 2.0 and Wi-Fi connectivity. It also has an SD card slot and a 3.2-inch, tilting LCD for viewing. The CP1300 comes with Canon Print Mobile and Party Shuffle Print apps and will print 50 photos on a charge. In black or white, $129.99.