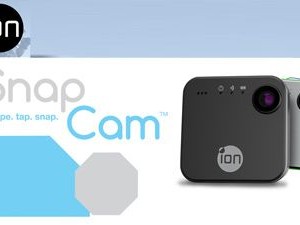 Somerset, NJ—At 1.5 inches square and weighing a little more than an ounce, the iON SnapCam connects wirelessly to a smartphone to make it easy to share HD videos and 8 megapixel photos—even stream video live—anywhere and anytime.

Developed to eliminate the various steps in capturing video and photos with a smartphone, with SnapCam users can be shooting video or taking photos in less than a second. SnapCam’s proprietary design—incorporating an OmniVision processor—allows it to spring to life with a swipe of the finger, and it stays ready with its seven-day standby time.

Small and discreet, SnapCam attaches onto clothing, hats, gear or backpacks via a clip or magnet. Equipped with both Wi-Fi and Bluetooth powered by Broadcom Corporation, the cam wirelessly connects to a smartphone so videos and photos can be uploaded instantly and shared.

“Today’s consumers are always on the go and definitely always connected. SnapCam lets them capture and share their lives as they’ve never been able to before . . . instantly and immediately,” said Giovanni Tomaselli, iON Camera’s CEO. “SnapCam is the first camera that effectively becomes an extension of the smartphone. It is tiny but powerful, making it simple for anyone to capture and share moments as they happen, with a simple swipe and tap.”

A tap on the SnapCam captures an 8MP image; a double tap starts 720p HD video recording at 30-frames-per-second resolution. Three taps activate live video streaming. Tapping the camera once more stops it from shooting. Videos and photos are saved directly to a microSD card or to a smart device via Bluetooth or Wi-Fi. In addition, the iON SnapCam app allows users to control all functions: they can save and upload videos and photos to the cloud or share them via social apps such as Facebook or Instagram.

Specs say that with a single charge, SnapCam can shoot 5,000 photos in time-lapse mode, record two hours of video or deliver one hour of live streaming—all with seven days of standby time. The cam supports up to a 32-gigabyte microSD card.

SnapCam’s brushed metal camera body comes in gunmetal gray, black or white, and it can be customized with colorful bumpers. Its suggested retail price is $149.99. iON also offers the SnapCam Lite ($79.99) with similar features but without wireless connectivity. Both cameras are expected to be available Q2 2015. ioncamera.com