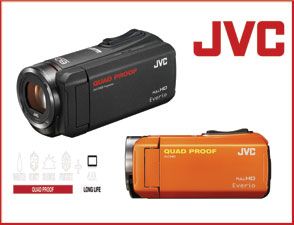 Wayne, NJ—JVC announced two rugged, weatherproof Everio camcorders that are designed to endure foul weather, get bounced around and still be ready to shoot. In addition to their all-weather features, the GZ-R450 and GZ-R320 offer five-hour battery life and long optical zooms.

Built with JVC’s “quad-proof” structure, the camcorders are waterproof to a depth of 16.4 feet, can withstand a drop from 4.9 feet, are freezeproof down to 14° F and are dustproof. They will also operate in temperatures as high as 104° F and will float if dropped in water. Both camcorders will be available in late July.

Not only are the Everio camcorders built to be more rugged than smartphones, they also offer superior optics via a large-caliber Konica Minolta HD lens with 40x optical zoom. A 60x dynamic zoom function uses the camcorders’ 2.5MP back-illuminated CMOS image sensor to maintain the picture’s HD resolution. The camcorders’ FalconBrid image processor, the same processor used in JVC 4K professional cameras, is engineered to deliver sharp images and sound. And audio quality is enhanced with JVC’s K2 technology, which is applied during recording for effective sound restoration during playback.

The battery in both models is internal for water resistance, eliminating the risk of damaging the camcorder when exchanging batteries in bad weather. The battery’s five-hour life can be extended with compatible third-party portable batteries.

The GZ-R450 is bundled with Everio Media Browser 4 software and works with iMovie and Final Cut Pro X. It comes in black with a rugged, coarse surface that doesn’t show fingerprints and smudges. Suggested retail price: $499.95.